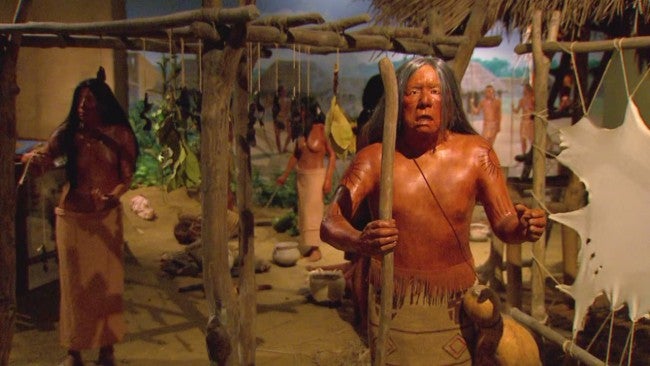 EVANSVILLE, Ind. (WISH) – Indiana means “Land of the Indians.” Yet before the Miami, the Chippewa and the Potawatomie there were Indians here known as Mississippians.

A piece of Mississippian artwork known as Kneeling Man was uncovered at the Angel Mounds historic site near Evansville. It’s where there was once a community of about a thousand Mississipians who survived by eating deer and corn.

“Angel Mounds is probably one of the best preserved Native American sites in the state of Indiana,” said site director Mike Linderman. “It’s about a hundred acres, dates from about the year 1000.”

The mounds are not as high as they once were because for about a hundred years after the Indians moved on, it was used as farmland.

And, no, they are not burial mounds.

“The eleven mounds were status symbols,” said Linderman. “The larger the mound you lived on top of, the more important you were, but the bulk of the community lived around the mounds.”

The chief and his family lived on the biggest mound. It’s a culture that was uncovered beginning in 1938.

“Eli Lilly bought it in the name of the Indiana Historical Society,” said Linderman, “and then they transferred to the state of Indiana in 1946.”

Life at Angel Mounds is now portrayed inside an interpretive center supplied with artifacts that were uncovered with the help of the Works Projects Administration.

Linderman explains it this way: “277 men, they worked from April of 1939 until May of ’42 after war was declared and the program was disbanded. They, in that short time, uncovered about 2 and a half million artifacts from only 3 percent of the property here.”

The Mississippians abandoned Angel Mounds in the 1400’s for a variety of reasons, including a dwindling corn crop. Their descendants became members of traditional tribes including the Miami.

Archaeology students from Indiana University now use the site as a field school.