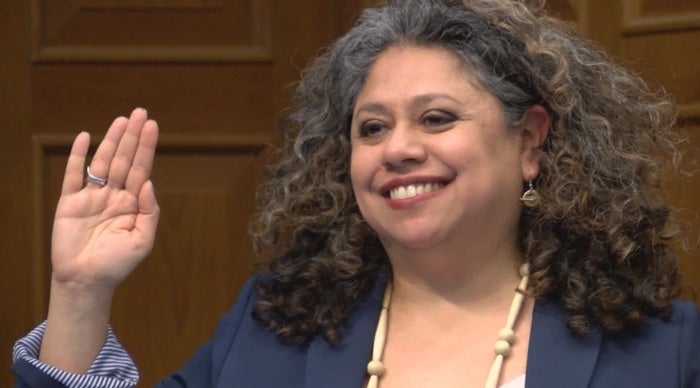 FAYETTEVILLE, Ark. (KNWA) — A grandmother’s love found in a nickname — Sonia que soña. Which means Sonia who dreams. And, dream she did while staying true to her roots.

“I’m first-generation Mexican American on my mom’s side and second-generation on my father’s side,” said Sonia Gutierrez, the first Latina city council member in Fayetteville.

This trailblazer was sworn into the Fayetteville City Council on January 2019. The University Of Arkansas graduate first ran for council in 2014 but didn’t get enough support. Yet, it didn’t stop her from making history. When asked if she’s always had her eyes set on local government, she laughing says “No.”

Her lack of interest in government was due to a lack of representation. “Growing up, I really didn’t see anybody like me in these types of roles,” said Gutierrez. So, she changed that for future generations. The interest began after getting to know city officials through her two graphic design businesses, Easel and 501C3.

“Everyone was all about helping people and building community and that spoke really to my heart,” said Gutierrez, “All of us need to be heard.”

After working with council members, she decided to become one. “It’s an honor. I really take it seriously and with great responsibility enjoy the hard work that it does take to do it,” said Gutierrez.

A lesson she passes on to her students. She’s also a teacher at Northwest Arkansas Community College to help the Latino community further flourish in Northwest Arkansas which is a region incredibly different from when she first arrived from Central Arkansas in 1992. “I don’t feel by myself in my culture, in the things that I’m buying and the flavors and the colors,” said Gutierrez.

Speaking of flavors, she’s adding a bit of hers to the social scene. “I just recently launched my DJ career,” laughs Gutierrez.

That’s right, she’s also DJ SQS. “My brother reminded me, you gotta go with the name grandma called you. Sonia que soña. So for short, it’s SQS,” she laughs. Playing everything from Latin to 70s and pop tracks to add some fun to her busy schedule.