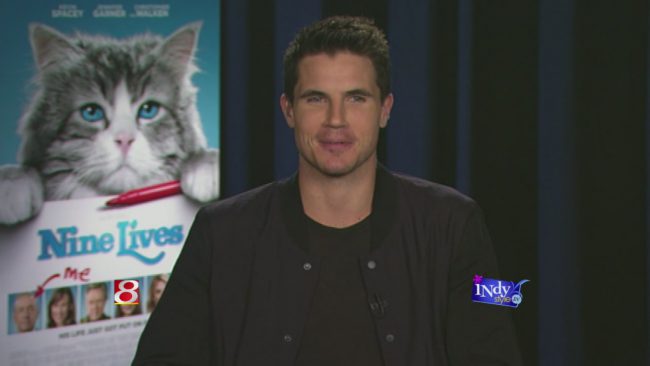 Ever wondered what it would be like to play Actor Kevin Spacey’s son? Well, just ask Robbie Amell. He plays that exact role in the new film, “Nine Lives,” which opens nationwide August 5. Today on Indy Style, Robbie chats with Tracy about the character, the experience and working alongside the man himself.

ROBBIE’S BIO – (David Brand) is one of the most sought-after young actors in Hollywood. He can now be seen recurring as Ronnie Raymond on the CW’s hit series “The Flash.” Amell was recently seen as Agent Miller, a recurring guest star, in the long-awaited revival of the critically acclaimed hit Fox series “The X-Files,” opposite David Duchovny and Gillian Anderson.

Previously, Amell played a lead role in Ari Sandel’s The Duff, alongside Bella Thorne, Mae Whitman and Allison Janney. The film revolves around a high school senior (Whitman) who instigates a social-pecking-order revolution after finding out that she has been labeled the D.U.F.F. (Designated Ugly Fat Friend) by her prettier, more popular friends. Additionally, Amell played a key supporting role opposite Josh Wiggins, Lauren Graham and Thomas Haden Church in Max, a family adventure written by and directed by Boaz Yakin.

On the small screen, Amell starred in the CW’s “The Tomorrow People,” NBC’s “1600 Penn,” MTV’s “Zach Stone Is Gonna Be Famous” and two pilots, Bill Lawrence’s “Like Father” (Fox) and Marc Cherry’s “Hallelujah” (ABC). He played recurring or guest-starring roles on such popular television shows as “Revenge,” Hot in Cleveland,” “Hawaii Five-0,” “Pretty Little Liars,” “CSI: NY,” “Brothers & Sisters” and “How I Met Your Mother.” Additionally, Amell starred as Fred in Cartoon Network’s telefilms “Scooby Doo! Curse of the Lake Monster” and “Scooby Doo! The Mystery Begins.” He played the leading role of Andy Brazil in the TNT original “Hornet’s Nest” and the sexy Drew Patterson in “Picture This,” opposite Ashley Tisdale.

Born in Toronto, Amell’s journey to Tinseltown wasn’t like that of most young actors. While his mother secured a commercial and print agent for him at the age of 6, Amell was never consumed with Hollywood and concentrated his efforts on sports. He became one of the best hockey players in his high school and had thoughts of going pro when everything changed. When Amell was a junior he was called in for his first-ever movie audition, reading for a featured role in Cheaper By the Dozen 2. He got the part and turned heads with his performance. After graduation, Amell packed up and headed for Los Angeles to dedicate himself to acting.

Another of Amell’s passions is One Heartland, a non-profit charity that helps children with HIV and AIDS. He loves to participate in their annual summer camps, which bring children from all over the world (most from poverty) and provide an expense-free week of camp experiences.

In his free time the actor is obsessed with cars, sports (especially hockey and golf) and hanging out with his fiancée and their two very little dogs.