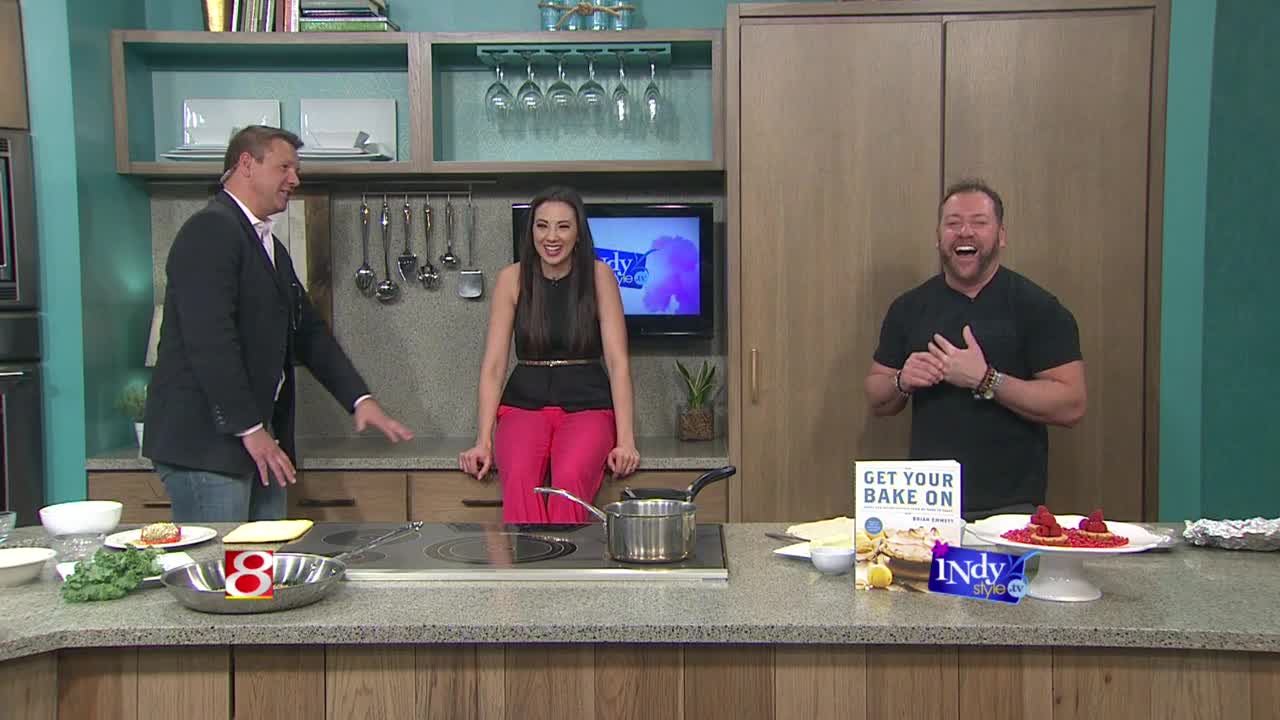 “Get Your Bake On”…. or in this case…. “Get Your Valentine’s Day Dinner On!” Author Brian Emmett shows us how!

• Zest of 1 lemon, plus 1 lemon cut into wedges

2 Combine ground flaxseeds, bread crumbs, herbs, garlic, lemon zest, and olive oil in a bowl to make topping, and then season with salt and pepper.

3 Spread flaxseed mixture over salmon fillets, flesh side up, and place fillets on prepared baking sheet.

4 Roast in oven for about 8 to 10 minutes, or until crust is golden brown.

5 Serve with lemon wedges and a salad of mixed greens.

*Gluten-free bread crumbs can be substituted for the whole-grain bread crumbs.Raspberry and Dark Chocolate Tartlet

Mix dough in food processor until it come to a ball and refrigerate for 20 minutesFilling:

Roll out tart dough and cut out circles with a 3 inch cookie cutter. Press dough circles into mini tartlet pan, cover each with a piece of foil, and fill with pie weights (blind bake). Bake at 375 degrees for 15 minutes; remove foil and weights and bake for about 5 minutes longer until golden. Set aside.

In the pot combine the chocolate, butter and corn syrup and stir until melted and combined. Set aside.

To assemble, fill each tartlet with some of the jam then top with chocolate mixture. Let stand until set (about 1 hour) then top with fresh raspberries.

Glaze: Bring the marmalade and 1/3 cup water to a boil. Then bush on tarts and sprinkle with powder sugar and slivered almonds if desired.About Brian Emmett:

Brian, the ultimate “foodie” and entertainer, has been baking, cooking, serving and designing the most unique experiences for family and friends for over 20 years. His complete obsession with food, baking in particular, started when he was young as he watched, listened and learned from his mother and grandmother. They would always be baking and cooking, and Brian would be on their heels – first observing and eating, then getting in on the action as he got older. In fact in grade school, he entered and won a baking competition. Brian continued to hone his baking and cooking skills over the years while working as marketing executive.

In 2013, Brian Emmett burst onto the culinary scene with his charm, confidence, and superior baking and cooking skills on season one of The American Baking Competition. He won over the hearts of Americans nationwide, who watched this enthusiastic husband and father immerse himself in his passion-and, ultimately, take home the illustrious title of “Top Amateur Baker.”

Now, in Get Your Bake On, Brian shares over seventy-five recipes that leave no doubt as to why he was crowned champion on the show. This cookbook, 228 pages, encompasses a hearty mixture of The American Baking Competition favorites, brand-new concoctions, and Emmett family recipes passed down through generations. Staying true to the show’s theme, there are plenty of sweets: From miniature tarts to his famous Cakey Chocolate Chip Cookie, Brian’s baked goods are sure to satisfy even the most demanding of sweet tooths. But Get Your Bake On also features a strong savory element with classic, feel-good recipes such as Sunday Brunch Strada and Chicago style Pizza. The book is available at Amazon, Barnes and Noble, Simon and Schuster, or any local book store. It has received rave reviews and has achieved ‘Best

Brian is currently writing his second book, which will focus on entertaining tips as well as his

exceptional recipes that will highlight cooking a number of different cuisine dishes. He still appears on lifestyle shows all over the country doing both cooking and baking demonstrations, and has was recently signed to endorse a hygiene product on national TV.

Brian is also one of lead instructors at Cooking Skills Academy, the largest cooking school in the Chicago area and is in the process of launching his catering cuisine company.