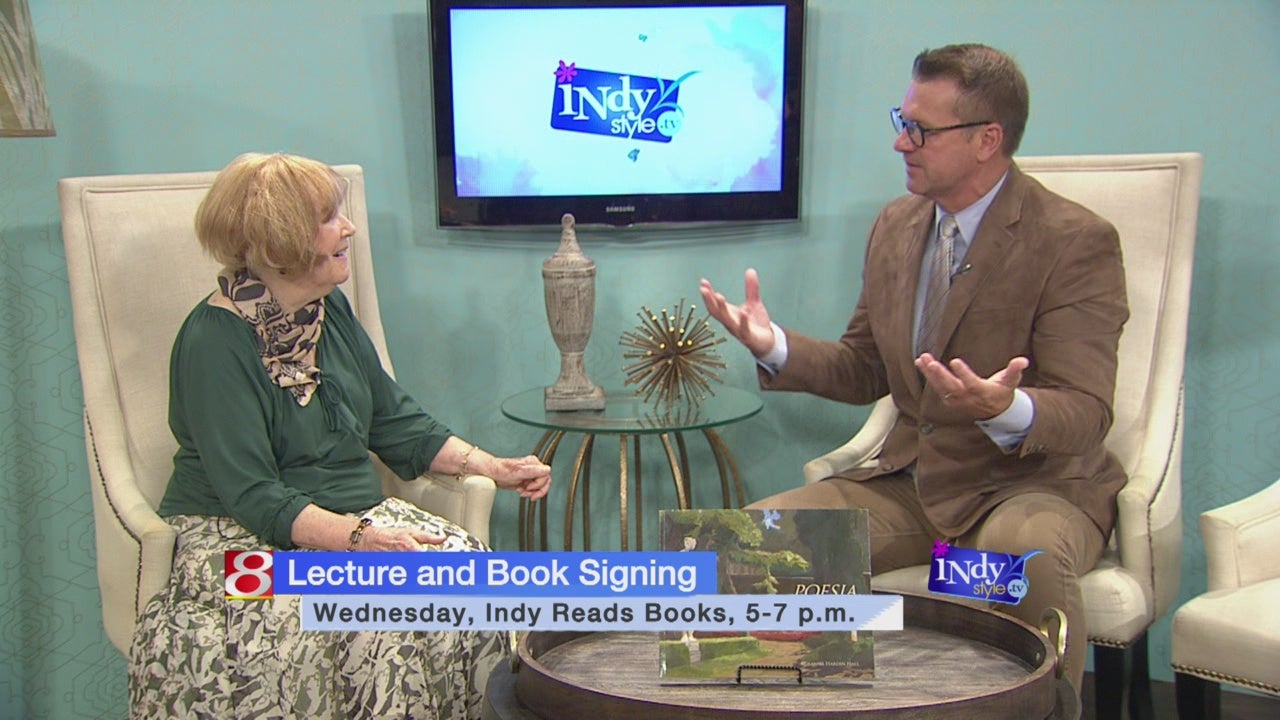 Her paintings and watercolors reflect the journey from her childhood, to Woodruff Place, to many locales around the world. Meet Indianapolis-based artist Rosanna Hardin Hall.

Rosanna is releasing her book, Poesia: Painting in Venetian Gardens with Giorgione (Mesa Verde Press, $37). It’s lavishly illustrated with her art and photographs, primarily from her many painting trips to Venice, but also from Rome and Florence, the American Southwest, and Hawaii (where she received her Master’s in Fine Arts). Poesia shares the story of her journey as an artist.

Rosanna will give a brief lecture and sign copies of her book at Indy Reads Books, 911 Massachusetts Avenue, on Wednesday, October 25, from 5 p.m. to 7 p.m.

She was married to the late Robert Novak, the well-known columnist and TV commentator. After their brief marriage, she moved to Paris to live the life of a Bohemian artist. In addition to Paris, she has lived in many areas now represented in her body of work: Taos and Santa Fe, New Mexico; Honolulu; and Washington, D.C.

Today, she lives in the large Queen Anne-style home in historic Woodruff Place, first occupied by her family in 1915. Behind the house at 700 Middle Drive is Villa dell’Artista, her two-story gallery where her art from Indianapolis, Italy, England, France, Hawaii, New Mexico, and the South Pacific is on display at First Fridays and by appointment.

In Poesia, the artist-author includes not only her own experiences as a painter and her life journey, she includes several selections of her “reverie,” an imaginary time spent in the Renaissance as the companion and lover of Giorgione. His works, as well as those of other Renaissance artists, are also featured in her book. Giorgione only lived into his 30s, but his works are considered some of the finest of the High Renaissance in Italy.

One of those, La Tempesta, is prominently featured in the book, including being the frontispiece. Hall provides rich details of the methods and subject matter of this work, now on display in the Accademia in Venice, and how it has influenced other artists, including herself.

“Poesia” is a term that is used to describe the joining of written and visual forms of art, making it an apt title for a book written by a former journalist (Indianapolis News, Santa Fe New Mexican, Peru Tribune, Washington Evening Star, and Honolulu Star-Bulletin) and life-long painter.

Rosanna’s book will be available at Indy Reads Books, by contacting alannerd@transcendent-travel.com, and at functions held at Villa dell’Artista (317-972-0898).