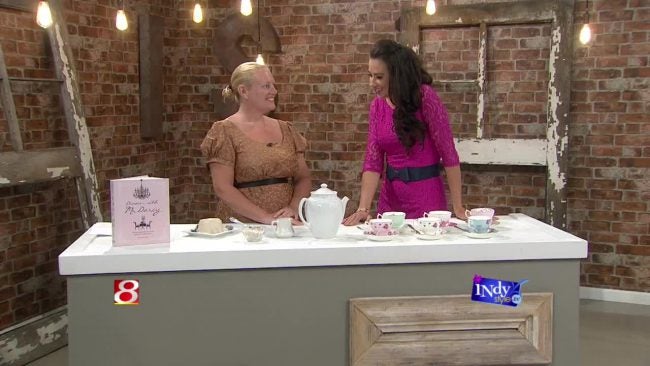 A sip of tea, all to celebrate the life and works of Author Jane Austen! Today on Indy Style, Tina Jesson, of Tina’s Traditional Tearoom, invites you to her regency garden party on June 30th in celebration of Jane Austen Week.

Here’s more about the author and celebration in her honor:

Who was Jane Austen? Jane Austen, one of Britain’s most loved writers, was a Georgian era author, best known for her social commentary in novels including Sense and Sensibility, Pride and Prejudice, and Emma. Jane was born in 1775. While not widely known in her own time, Austen’s novels of love among the landed gentry gained popularity after 1869, and her reputation skyrocketed in the 20th century. Her novels, including Pride and Prejudice and Sense and Sensibility, are considered literary classics, bridging the gap between romance and realism.

Tell us a little about her life. Jane’s parents were well-respected community members. Her father served as the Oxford-educated rector for a Anglican parish. In 1801, Jane moved to Bath with her father, mother and Cassandra. Then, in 1805, her father died after a short illness, the family moved to various houses in Bath. Jane never married. Jane started to anonymously publish her works in her 30’s, Pride & Prejudice was published ‘by a lady’. Jane became ill when she was only 41 and died in 1817. It was only after her death that her brother finally reviled that the unknown author was in fact Jane Austen.

What is Jane Austen Week? Jane lived most of her life in the English spa town of Bath, which to this day, is one of the best examples of Georgian architecture in Britain. As a result, Jane Austen fans flock to the town each year and celebrate the life and works of the author through a series of events known as the Jane Austen Festival. The annual event includes theatre, music, food, a ball, workshops, readings, dances and the famous Regency Promenade. Most participants take the opportunity to dress in period.

What’s Happening at the Tearoom? At Tina’s, we are always celebrating our British-ness and through Jane Austen’s novels, people get a sense of what life in England was about at that time and Jane describes a number of foods like tea and crumpets and flummery. We thought it would be fun to marry up some of the foods mentioned in her books, with an event that honors and celebrates the authors life and works. We’ll be serving afternoon tea on the tea terrace and guests will dress up and have a spot of tea, just as in Jane’s day. We’ll also be giving away a great door prize for best dressed of a pair of regency mugs.

Do you still have tickets? Yes we do, call us or go to our website for more details. 6pm – 8pm Thursday June 30