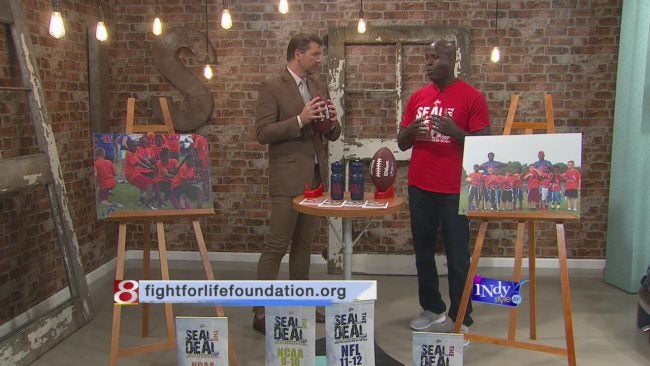 Marlin’s back, and he brought his adorable 3-year-old son with him! You may remember the story of “Seal the Deal,” on January 21, 2007. It was on this day that Marlin intercepted New England Patriots quarterback Tom Brady with 18 seconds left in the fourth quarter of the AFC Championship Game to Seal the deal for the Colts’ 38-34 victory, sending them to Super Bowl XLI against the Chicago Bears, which they subsequently won. Marlin’s character has allowed him to Seal the Deal in many key moments like the one on January 21, 2007.

Today, Marlin serves as the president for the Fight for Life Foundation, helping seal the deal for youth football camp! This year, it aims to serve underserved youth of Indianapolis from 2pm-7:30pm, June 11-12. Participants are young boys and girls, NCAA ages 7-10 and NFL ages 11-14. This free camp will take place at Pike High School 5401 West 71st Street Indianapolis, In 46268.

Through responsible decision making and discipline behavior in life and athletics, Marlin has displayed accountability to his family, friends and past teammates. These character qualities and so many others lie within athletics. Marlin says that through Fight for Life’s Seal the Deal program, they connect the game of life to the game of football, preparing student athletes for success on and off the field through fun-filled youth football camps and academies.

“Due to my childhood struggles, I was motivated to start the Fight for Life Foundation in order to help underserved youth overcome obstacles and attain their goals. In my role as President of Fight for Life, I have a distinct vision and the ability to uplift, empower, and guide underserved youth through character development, self- reflection, and sports related programming. Seal the Deal is a key component of FFLF’s mission, education, athletics-we believe wellness activities are the foundation for youth development.”