You Won’t Be Bored by These Board Games 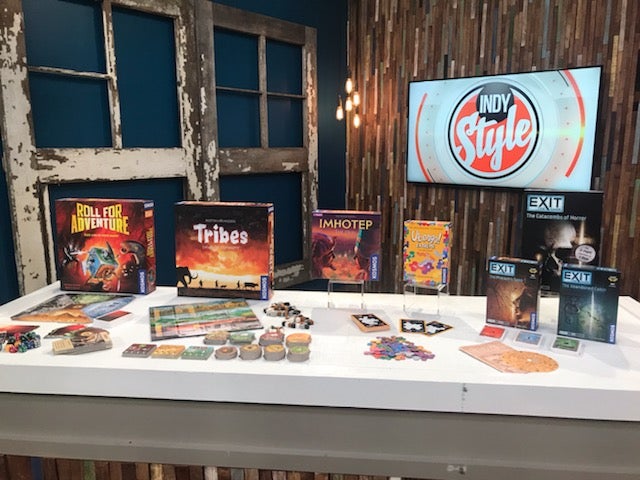 Tired of Monopoly? Need a “twist” on the classic board game?

Ed Gartin, the Director of Product Development from Thames & Kosmos, shares some of the newest board games to come out of this year’s Gen Con!

Gen Con is the longest-running gaming convention in the world is here in Indianapolis this week. More than 500 companies are exhibiting, including Thames & Kosmos, the award winning publisher of science kits, educational products and board games, which bring creative, hands on learning experiences to kids of all ages.

Tribes
● Experience 30,000 years of civilization in 45 minutes.
● Tribes: Dawn of Humanity is a civilization game with quick turns and fast rounds.
● The players lead their tribes in short, fast turns through the early history of humanity to the Bronze Age.
● They settle unknown lands and extract valuable resources through which they in turn discover new tools and inventions.
● Who will best prepare their tribe against events such as natural disasters? Who will take the lead, and who will follow in the footsteps?
● AGES 10+ MSRP: $49.95. Available Summer 2019.

Roll for Adventure
● The old kingdom is in danger.
● Enemy armies are attacking from all directions thanks to the Dark Lord, who seeks to cast eternal darkness across the land.
● Players must band together to collect the fabled power stones and complete the magical amulet. If they succeed, they’ll save the empire and win the game.
● However, should even one area fall under the control of the Dark Lord, the players lose the game immediately.
● A dice-rolling fantasy game for 2-4 players. AGES 10+ MSRP: $34.95. Available Summer 2019.

Imhotep: The Duel
● The competition of the builders continues in Imhotep: The Duel!
● In this game, players take on the roles of Nefertiti and Akhenaten, one of Egypt’s most famous royal couples.
● Game pieces must be cleverly placed so that players can unload the most valuable tiles from the six boats.
● While this is happening, each player builds their own four monuments in order to gain as many fame points as possible.
● AGES 10+ MSRP: $19.95. Available Summer 2019.

Ubongo Extreme: Fun-Size Edition
● A new addition to the Ubongo series, this Extreme version uses hexagonal shapes!
● Each player receives a set of eight tiles.
● The tiles are polyhexes – geometric shapes formed of equal-size hexagons joined edge to edge in different arrangements.
● Race against the timer and each other to perfectly fill the blank space on your puzzle board!
● AGES 7+ MSRP: $14.95. Available Summer 2019.

Brainwaves series
● Brainwaves: The Astute Goose: Players must identify a burglar hiding in a crowd.
● What did the culprit look like? What color were their clothes? And what animal accomplices did they have with them?
● Suspect cards are assigned a number, from one to six. Players look at these cards, then turn them face down.
● On a turn, a player rolls the two dice: one showing a number, the other characteristic of a burglar card.
● If the player can identify the correct item on the correct burglar card, they claim that card as a reward, and then put a new card in its place.
● Whoever collects the most cards wins.
● AGES 8+ MSRP: $14.95. Available Summer 2019.
● Brainwaves: The Brilliant Boar: Each player takes cards showing different animal portraits on their reverse sides.
● They can look at the cards briefly when they draw them, but then must face the cards away from them.
● On a player’s turn, they can either take the top card from the deck into their hand or play one of their cards onto the table, attempting to make as many pairs as possible from the card just played and those already face up on the table.
● Whoever collects the most cards wins.
● AGES 8+ MSRP: $14.95. Available Summer 2019.
● Brainwaves: The Wise Whale: Players lay nine cards showing different colorful sea creatures face down after trying to memorize which creatures are on which cards.
● During a player’s turn, they reveal a new card from the deck. Then, they must reveal a card that matches either the creature or the color on this new card.
● If they do, they claim this card, and then lay out a new card face down in its place. Whoever collects the most cards wins.
● AGES 8+ MSRP: $14.95. Available Summer 2019.

EXIT: The Game (with a focus on EXIT: The Catacombs of Horror)
● EXIT: The Game is a series of party games for up to four players that offers a unique, unforgettable gaming experience.
● These games allow you to bring the excitement, intensity, and team spirit of an escape room to your living room.
● In each EXIT game, your team starts out locked in an imaginary room, or trapped somewhere.
● You must solve a series of riddles and puzzles in order to unlock doors and reveal new riddles.
● Each correct solution brings you to another riddle and eventually to freedom. The clock is ticking:
● You must solve all of the puzzles as fast as you can because the faster your team escapes the room and the fewer hints you use along the way, the more points you earn.
● Get ready to test your creative problem solving and logical thinking skills, because the rulebook in an EXIT game doesn’t reveal all the rules like in other games.
● After the rulebook gets you started, it’s up to your team to discover for itself how the rooms look, what the clues are, how to decipher them, and how to escape.
● PLAYERS: 1 to 4 AGES 12+ MSRP: $14.95

EXIT: The Catacombs of Horror
● Gloomy crypts lie under the city of Paris.
● The catacombs swallow city light, riddles, and, apparently, also people.
● After the mysterious disappearance of a friend in the catacombs, you and your team embark on a search party, making your way through the puzzling underground labyrinth. PLAYERS: 1-4 AGES 16+ MSRP: $24.95

Come visit KOSMOS at Booth #1649 at Gen Con to see these games in action!