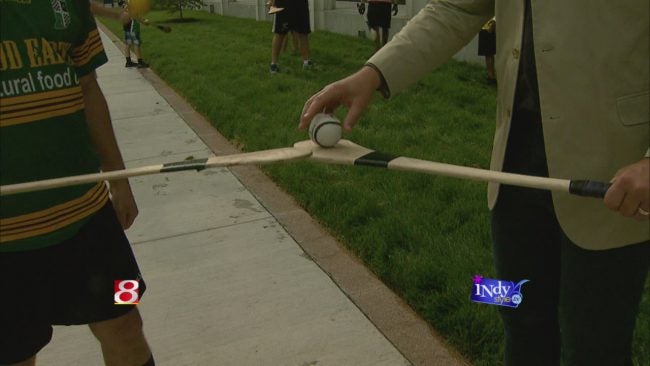 Ever heard of Gaelic football or hurling? If not, you’re about to! Coming up this weekend is the 9th annual Indianapolis Invitational, where teams across the Midwest will be competing in the traditional Irish sports of hurling, camogie, and Gaelic football.

It was only two years ago The Indianapolis Gaelic Athletic Association (GAA) hosted the first organized event at the new World Sports Park on the Indianapolis east side. It was a roaring success as hundreds of players and fans turned out to inaugurate the new international multi-sport venue. The 2015 tournament was the second largest GAA event in the U.S. during the year.

In addition to Gaelic sports, vendors will be on hand serving food, and Indianapolis brewer Flat 12 Bierworks will be serving locally brewed beer. Select Physical Therapy will be providing support to all participating athletes.

Rudy Nehrling, Hurling, Indy GAA, and Paul Romer, Gaelic Football, Indy GAA, give us a lesson in both sports!Indianapolis Invitational:

Indianapolis Gaelic Athletic Association (Indy GAA) is a non-profit organization dedicated to promoting Gaelic sports in the Indianapolis area. They have 200 playing members and over 300 total members to play the Irish sports of hurling, Camogie (women’s hurling), and Gaelic football. They have hurling and Gaelic football leagues in which each team is sponsored by Indianapolis-area businesses. In 2015, the club won the Men’s Junior A hurling championship and Men’s Junior D Gaelic football championship at the NACB Championships in Chicago. Indy GAA is welcoming of all ages, genders, and athletic abilities and has a growing youth organization that has been very successful at the national level.

Behind the Bricks / 25 mins ago