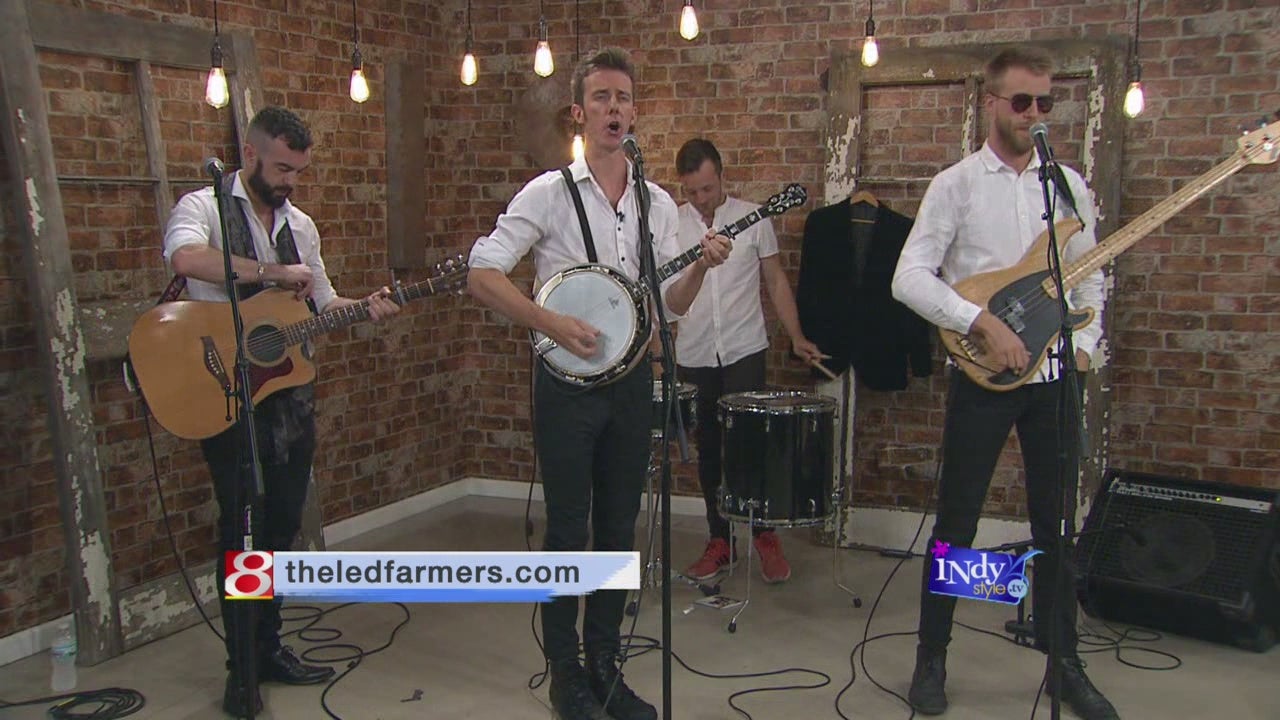 They were quick to make friends in our studio and not shy away from a wardrobe change! Meet The Led Farmers, performing at this year’s Indy Irish Fest!

Indy’s Irish Fest returns to Military Park Sept. 15-18 for its 21st annual celebration of the state’s Irish heritage. This year’s festival incorporates commemoration of the 100th anniversary of the 1916 Easter Rising in Dublin, Ireland and a nod to the history of traditional music. The preview pub concert night is returning, featuring two Celtic rock bands on Thursday, and for the first time ever, will include free admission! Thursday night’s bands include Indy festival newcomer, Whiskey of the Damned and the return of a fan favorite, The Fighting Jamesons. Attendees are encouraged to bring canned goods for the food bank.

More than 30,000 people are expected over the four-day festival, which features live Irish music and step dancing on four stages, as well as shopping, food, cultural and children’s activities, sporting events and more. The full slate of activities will begin on Friday and will feature performances by groups from Ireland, across the U.S. and Canada, as well as local favorites. Frequent fest goers will see the return of Off Kilter, a fan favorite from Epcot Center. New-to-Indy acts include, the Led Farmers, a folk band hailing from Ireland. Also this year we will see performances by Gailfean, a brilliant group of trad musicians with the likes of All Ireland champions, John Whelan, seven times button box champion, fiddler, Brian Conway, storyteller, Máírtín De Cógain as well as Don Penzien on keyboards. Ireland’s Bard, Tom Sweeney will be performing, as will Brian Doherty and Kevin Evans out of Nova Scotia. The three will team up to present a special tribute to the 1916 events. Also new to Indy Irish Fest is a Celtic rock group, Chance the Arm.

For those of you old enough to partake in adult beverages, Indy Irish Fest is adding some great options for the weekend. Local favorites New Day Meadery will be onsite and for those craft beer lovers, Sun King Brewery will be joining the fest as the official craft beer provider- and pints of their Irish Stout, Ring of Dingle, brewed especially for the fest, will be available for purchase. Also new this year, will be the Tullamore Dew Snug. Fest patrons will be able to purchase Tullamore Dew and Gingers or Irish coffee at the Tullamore bar, and will also have the chance to speak with brand ambassadors and try exclusive product.

The festival continues to be a great bargain with advance sale tickets only $10, a thirty three percent savings off the gate price. Attendees staying at the Fairfield Inn will benefit from the inclusion of two weekend passes good for Friday through Sunday. The hotel is a short walk to the park. At the gate, attendees can save money with the festival’s early bird $5 admission from 4:30-5:30 p.m. Friday, September 17th, or Sunday morning, the 19th, with donations to the area food bank.Ticket Prices

The festival includes an Irish Market with over 25 vendors selling Irish wares; a cultural area with demonstrations & exhibitions, and the Indianapolis Gaelic Athletic Association will be onsite performing hurling demonstrations. A Kilted Mile takes place on Sunday with great fun promised whether you’re running or just watching! Don’t miss the award ceremony for the runners with the best kilt, bonniest knees, best jig in a kilt and least likely to finish.

See cultural exhibits that include information on the Easter Rising, Irish American Presidents, the history of Ireland, memorials to the Great Famine, origins of popular Irish songs, Celtic Saints, and Wild Irish Women. Attendees will also be able to visit with local Irish and Scottish organizations.

On Sunday, a 10:30 a.m. Celtic Mass will be held on the festival grounds. Gates open at 10 a.m. Visitors attending Mass or arriving prior to 11:30 a.m. receive free admission if they bring at least three canned goods per person to donate to the St. Vincent de Paul Food Bank.

Returning this year after a crowd-pleasing debut last year will be a presentation and hands-on activities by Silly Safari, bringing animals and animal education to the event Sunday only.Kids Activities

Youngsters can work off plenty of energy in the Wee Folk Area, featuring a craft tent, storytelling, a coloring contest, face painting and more. Wristbands, included in the gate cost, admit kids to a special area complete with games and other fun activities.

SEGMENT IS SPONSORED BY IRISH FEST