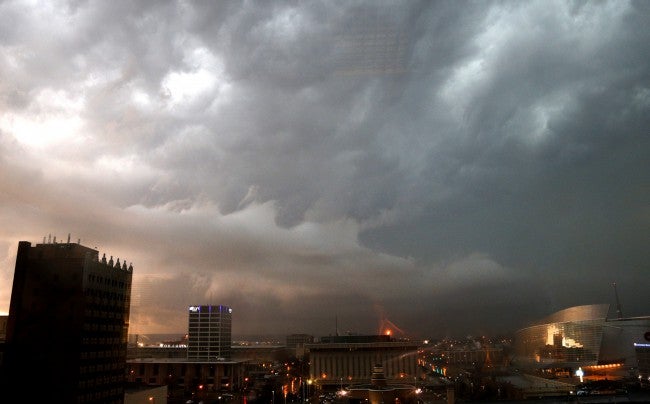 TULSA, Okla. (AP) – The slow start to the nation’s tornado season came to a violent end Wednesday, when tornadoes raked Tulsa during its evening rush hour, killing one person and injuring others.

Tulsa County Sheriff’s Capt. Billy McKelvey said one person was killed in a mobile home park near suburban Sand Springs that was nearly destroyed Wednesday amid severe weather. It wasn’t yet clear whether it was a tornado or straight-line winds that hit the mobile home park, which McKelvey said could accommodate 40 to 50 trailers. McKelvey couldn’t say exactly how many people were injured, but said there were multiple injuries.

“It could have been much worse,” he said.

Tornadoes were seen elsewhere in Oklahoma, as well as in Arkansas, but no injuries were reported from those.

A small tornado swept across parts of Moore, an Oklahoma City Suburb where 24 people in a top-of-the-scale EF5 tornado in 2013. Other twisters formed along a line from southwest of Oklahoma City to east of Tulsa, and some touched down in the Ozark Mountains of northwestern Arkansas.

Until Tuesday, when a waterspout formed over an Arkansas lake, the U.S. hadn’t had a tornado in more than a month.

Television video Wednesday evening showed roof damage in a Moore neighborhood – the Moore storm two years ago scraped lots to their foundations. A glass door at the Tulsa building that houses the National Weather Service office was smashed, and several cars in the parking lot lost their windows.

Don Ruffin said he and a neighbor were at a convenience store in far southeast Moore when he saw the tornado approaching.

“I don’t know how close it was to us, but it looked like it was coming toward us, and so we didn’t take any chances,” Ruffin said. “We got in our vehicles, ran home and got in our shelters.”

Ruffin said after the storm passed, there were some fences knocked down and “patio furniture thrown everywhere.”

Electric companies reported 27,000 homes and businesses were without power in the Oklahoma City area and 28,500 had lost power in Tulsa County. The Oklahoma Highway Patrol said an overturned tractor-trailer had snarled traffic in both directions on Interstate 35, a major north-south route.

“Those troopers are working their guts out there right now,” Lt. John Vincent said.

The tornado season usually ramps up for parts of the U.S. in March, but weather patterns funneled cold air into much of the country, depriving the atmosphere of the warm, moist air necessary for form bad storms for most of the month.

That all changed this week. Southerly winds pushed temperatures into the 70s and 80s across the Ozarks and Southern Plains, while weather fronts churned the air into Wednesday’s storms.

Meteorologist Jeff Hood in Little Rock said a weak waterspout tornado briefly touched down in Bull Shoals Lake in Marion County in northwest Arkansas on Tuesday night. He said it will likely be classified an EF0 – the weakest tornado with wind speeds of 65 to 85 mph. A waterspout forms over water. The tornado never made it onto land, and there were no reports of damage.

“This will be the ‘tornado’ that breaks the drought for March,” Greg Carbin, warning coordination meteorologist for the Storm Prediction Center, said before Wednesday’s storms hit.

Before this week, only about two-dozen twisters had been recorded this year during a period when about 120 are typical. The last time the U.S. had no twisters in March was nearly 50 years ago, according to figures from the Storm Prediction Center in Norman, Oklahoma.