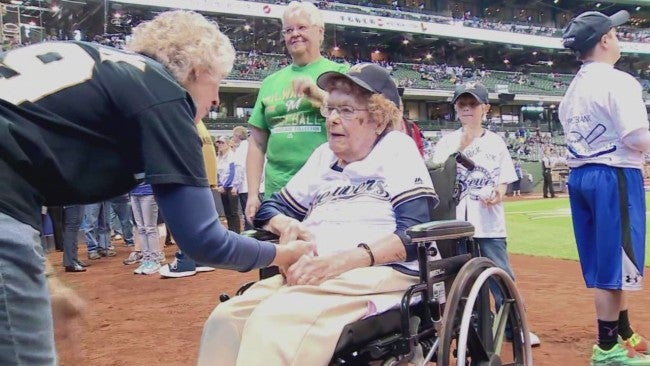 MILWAUKEE, Wisconsin (CNN) — Sunday was a big day for an elderly baseball fan.

At 102 years old, a Wisconsin woman tossed out the first pitch at a Milwaukee Brewers’ game against the Diamondbacks.

Gladys Holbrook says she’s been a fan for a long time. She says a friend of hers submitted her name to the Brewers, and the team picked her. On Sunday, she tossed out the ceremonial first pitch.

Many of her supporters wore T-shirts encouraging her to “throw the heater” – referring to a fastball. The back of the shirt read “throwing 102 at 102.”

Holbrook says she never expected all the support.

“I’m overwhelmed for this whole thing all the while. I don’t know what the fuss is about,” Holbrook said.

The game itself set a record. It went 17 innings and lasted for five hours and 49 minutes – the longest ever at that ballpark.