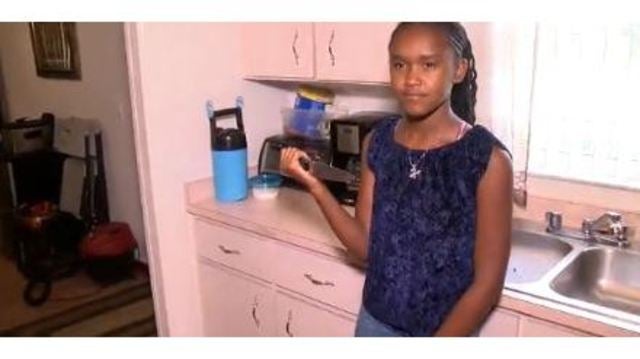 LAKE WALES, Fla. (CNN) — A burglar met his match when he broke into a home in Lake Wales, Florida.

A 12-year-old girl scared him away.

Woken from a deep sleep, Paris says she was confused the man telling her he knew the family.

“I had an old phone that doesn’t work it was sitting on my dresser so I guess he looked at that and made up an excuse saying ‘Oh my uncle told me to come get my phone,'” Paris said.

She didn’t buy it.

“I told him to leave and he went out the back door,” she said.

Well if things weren’t scary enough for Paris, she was told to run across the street to her neighbor’s house, but the guy was waiting for her.

That’s when she ran inside and grabbed a knife.

“I pulled it out and grabbed it like this and I had went back over to the door and I had the knife and I told him I said ‘You need to leave I don’t know you. no I don’t want to go outside and chill with you,'” she said.

Paris’ grandparents are grateful she stayed calm, remembered the burglar’s face, and didn’t get hurt.

She is scared to sleep alone but knows police will get him off the streets soon.

Lake Wales police released a sketch of the man Paris says looks identical to the man in her home.

Police are asking anyone who may recognize him to call them.