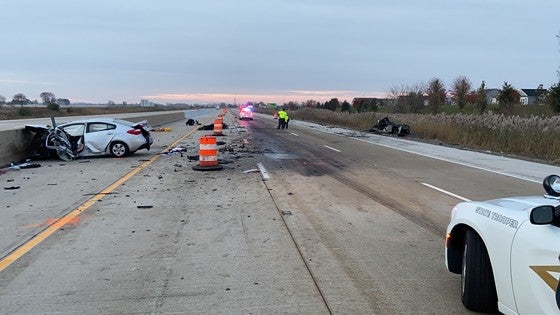 UPDATE: The driver of the Corvette has been identified as 20-year-old Suhail Saif Suhail Humaid Alderei, an exchange student at IUPUI.

CROWN POINT, Ind. (WISH) — Two people died when a wrong-way driver crashed into a Corvette on I-65 in northwestern Indiana Sunday morning.

A 911 caller reported a vehicle had gotten onto the highway from the wrong ramp at U.S. 231.

The driver, Anna Warner, 21, of Beaverville, Illinois, drove a Kia north in a southbound lane before crashing head on into a Chevy Corvette.

Two males were inside the Corvette. The driver of the Corvette, whose identity has not been released, died at the scene. The passenger was transported to Franciscan Health with non-life-threatening injuries.

Warner was also transported to Franciscan Health where she later died from her injuries.

State police say alcohol is believed to be a factor in the crash.

All lanes of southbound I-65 were closed for about seven hours. The lanes reopened around 8:30 Sunday morning.