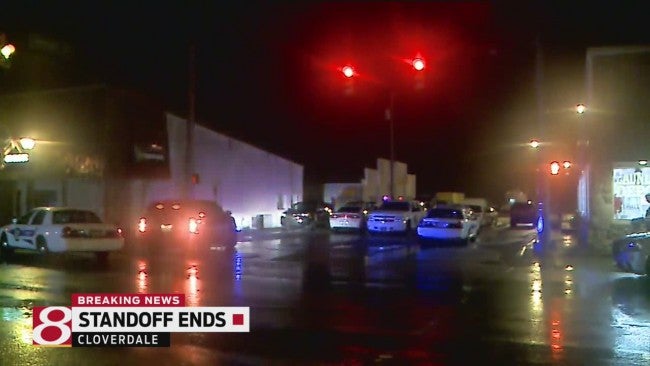 CLOVERDALE, Ind. (WISH/WTHI) — After nearly 15 hours, the standoff between police and a father came to an end early Friday morning. Police had to work carefully because a 2-week-old infant was inside with the gunman. Police are chalking this up to a win because the standoff ended peacefully and with no injuries.

The stand off started after the Department of Child Services was called to the residence in Cloverdale to conduct an investigation. According to police, the suspect showed a handgun to DCS. That is when DCS left the residence and contacted police.

ISP SWAT and negotiators arrived on the scene to peacefully resolve the situation.

Sgt. Joe Watts with ISP said there were two adults and an infant in the residence, including the suspect. No one was injured, police said.

“We did recover a weapon that we believe that was involved but it’s going through forensics right now and been seized by the Indiana State Police,” said Watts. “Again all through the night we were patient we put out tweets to keep you all informed but dialogue was open and communication was open throughout the evening and we’re very happy it ended like it did.”

According to the suspect’s father, James Edward Kirby, he says his son, James E. Kirby was the man barricaded in the residence.

Kirby, later identified by police as the suspect, was arrested and preliminary charged with criminal confinement, resisting law enforcement with a weapon and neglect of a dependent.

Neighbors say this isn’t the first time this family’s children have been at the center of attention. The suspect James Kirby and his fiancé Amanda appeared on an episode of Maury Povich.  They were there to find out if James was the father of their twins. Friends who stood on the corner throughout the night say Kirby was desperate to keep his two week old infant from CPS.

The infant was transported to the Putnam County Hospital for evaluation. The Putnam Circuit Court will determine placement for the infant following the evaluation.

As of Friday morning the mother has not been charged.