20 killed in limo crash on Route 30 in Schoharie 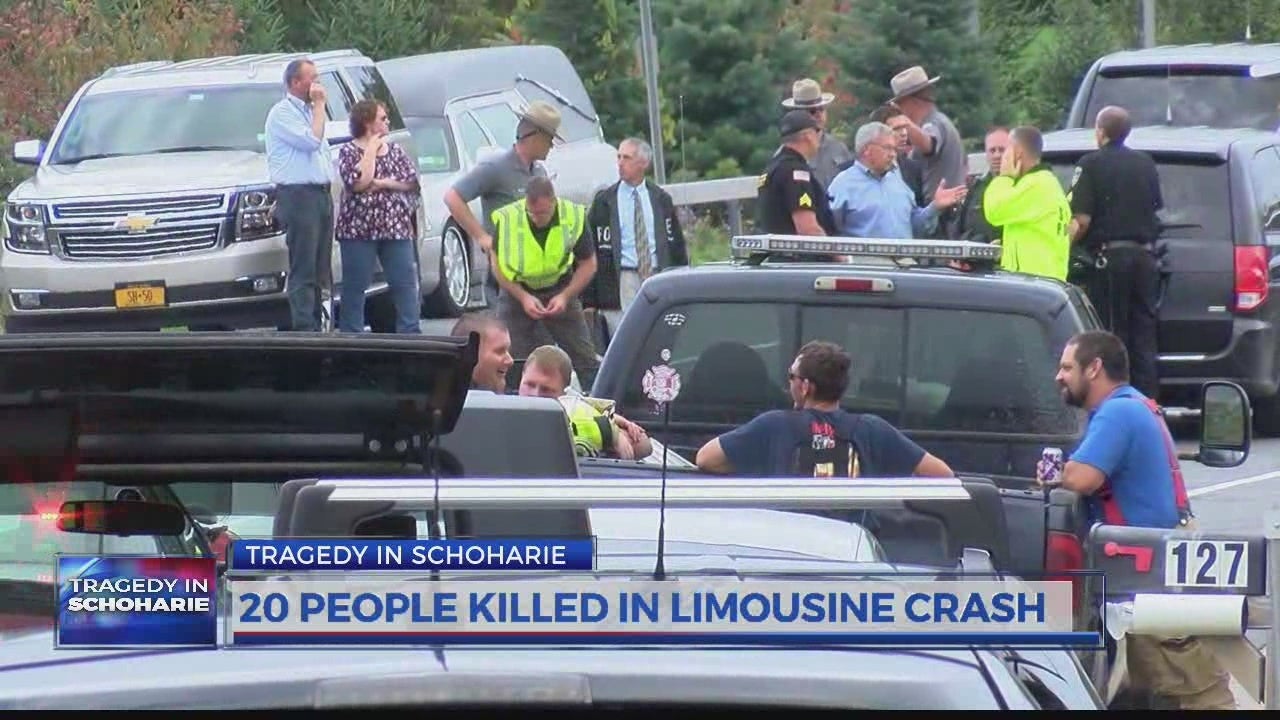 Twenty people were killed in a horrific car crash at the intersection of Routes 30 and 30-A in the town of Schoharie just before 2 p.m. Saturday, New York State Police say.

State Police have determined that a 2001 Ford Excursion limousine was traveling southwest on Route 30 and failed to stop at the Route 30-A intersection.

The limo traveled across the intersection into the Apple Barrel Country Store parking lot and struck a parked and unoccupied 2015 Toyota Highlander.

The Highlander then struck and killed two nearby pedestrians.

All twenty victims were adults, eighteen of those were in the limo.

The limo continued into a small wooded ravine where it came to a rest.

The National Transportation Safety Board arrived Sunday morning to begin their investigation.

The NTSB did not want to speculate on a cause, however, autopsies are underway at Albany Medical Center.

The investigation is in the early stages, but NTSB Chairman Robert Sumwalt said that they’ll be thoroughly documenting the scene for at least the next five days.

“You asked about the magnitude of this, 20 fatalities is just horrific.  I’ve been on the board for 12 years and this is one of the biggest loss of lives that we’ve seen in a long long time,” said Sumwalt.  “This is the most deadly transportation accident in this country since February of 2009.”

The chairman is referring to the Colgan Air Flight 3407.  The passenger plane from Newark crashed into a home near Buffalo and killed 49 people on board.  The cause was determined to be a pilot error.

Police have not yet released the names of those killed in the Saturday’s crash as officials work to locate and contact members of their families.

State Police have set up a dedicated phone line to assist family members of the victims. Family members are encouraged to call 1-877-672-4911.

One man lost his cousin who he describes as a beautiful person who would do anything for anyone.

One woman lost four of her nieces and their husbands in the accident.

“They were beautiful girls physically and beautiful inside.  They were full of life and they weren’t that old.  They had their whole life ahead of them,” said Barbara Douglas.

She said that they were celebrating a surprise 30th birthday.

One of the victims was an employee of the Greater Amsterdam School District.

The Red Cross and State Police have arranged an area at the Lynch Literacy Academy in Amsterdam for grief counseling.  They will there Monday from 9 a.m. until 3 p.m. and will also be on hand Tuesday when students return.

Fundraisers have been set up for families of the victims.

The Apple Barrel Country Store responded to the crash on Facebook.

As you may be aware, there was a horrific accident in front of our business today. First, we want to thank all of the…Posted by Apple Barrel Country Store + Cafe on Saturday, October 6, 2018

The owners of the Apple Barrel say they will be holding a vigil for the victims on Tuesday, October 9th at 6 p.m. at the scene of the crash.

The store has also thanked first responders, and are collecting donations on their Facebook page for local volunteer emergency services who assisted with the response.

As agencies continue to investigate what may have caused this horrific crash, locals say this intersection has been a problem for years.

“It’s not anything anyone should ever have to experience,” said Jessica Kirby from the Apple Barrel.

Her family has owned the store for over 30 years.  She says in all those years she has seen plenty of accidents but none like this one that occurred just feet away from her business.

“The intersection used to be different before, but never anything that happened like this in the last few years especially what happened yesterday,” said Kirby.

“We have businesses here where traffic is entering and exiting and people get impatient,” said Bob Price, a local resident.

Apple Barrel owners say they can attest to this.

“Tractor trailers have come down the hill before and actually come across the parking lot during store hours when someone could have been killed,” said Kirby.

After so many near misses, this accident leaves many people mourning the loss of several loved ones whose lives were taken away too soon.

“I’m hoping for closure.  I’m hoping that the guys that were affected find peace,” said Kirby.

Portions of Routes 30 and 30-A were closed for hours Saturday into Sunday, but were reopened around 4:00 a.m. Sunday when the scene was cleared, according to New York State Police.