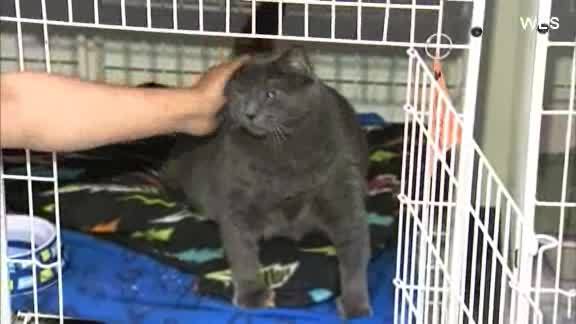 MORTON GROVE, Ill. (WCMH) — A little ball of fur and flab at an animal rescue center in Illinois is looking for a “purrrfect” home.

Bruno is a Russian blue cat, a breed that usually weighs up to 10 pounds.

But he packs a solid 25 pounds. And he wears it proudly.

He arrived at the shelter in Morton Grove in April.

One of the tricks he has up his sleeves is to stand up on his hind legs.

Bruno is a “polydactyl” cat, meaning he was born with more toes than usual.

The animal shelter manager says Bruno is happy-go-lucky, especially when food is involved.

“When I first met him, he was a happy, goofy guy. Obviously, he is very food-motivated, so he learns quickly where his food is up on the counter,” Jason Abbas, manager of Wright-Way Rescue told WLS.

The shelter says it has received adoption applications from across the U.S. and even as far away as Australia, Wales and Canada.