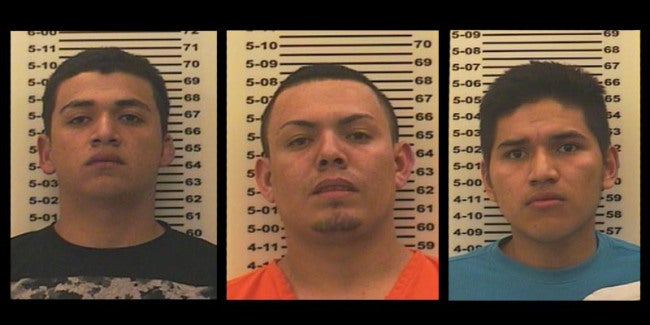 JASPER COUNTY, Ind. (WLFI) – Three Monon men were arrested after investigators say they took three minors to a motel to sexually assault them.

The investigation started Wednesday when two of the female victims reported the incident to a school guidance counselor.

According to investigators with the Jasper County Sheriff’s Office, the three victims were picked up in White County and were eventually taken to a motel near Interstate 65 and State Road 114 in Rensselaer. Authorities said that is where the victims were sexually assaulted.

After leaving the motel, one of the females said she was again sexually assaulted in the car.

Ramirez-Diaz has been preliminarily charged with strangulation, sexual misconduct with a minor, rape when compelled by force or threat and criminal confinement with a victim under 14 years of age.

Marquina-Valesquez and Ramirez-Morales have been preliminarily charged with child molesting, rape when victim in unaware of actions, rape when compelled by force or threat, and criminal confinement with a victim under 14 years of age.

All three men are from El Salvador and were in the country illegally. They also have a hold from U.S. Immigration and Customs Enforcement.