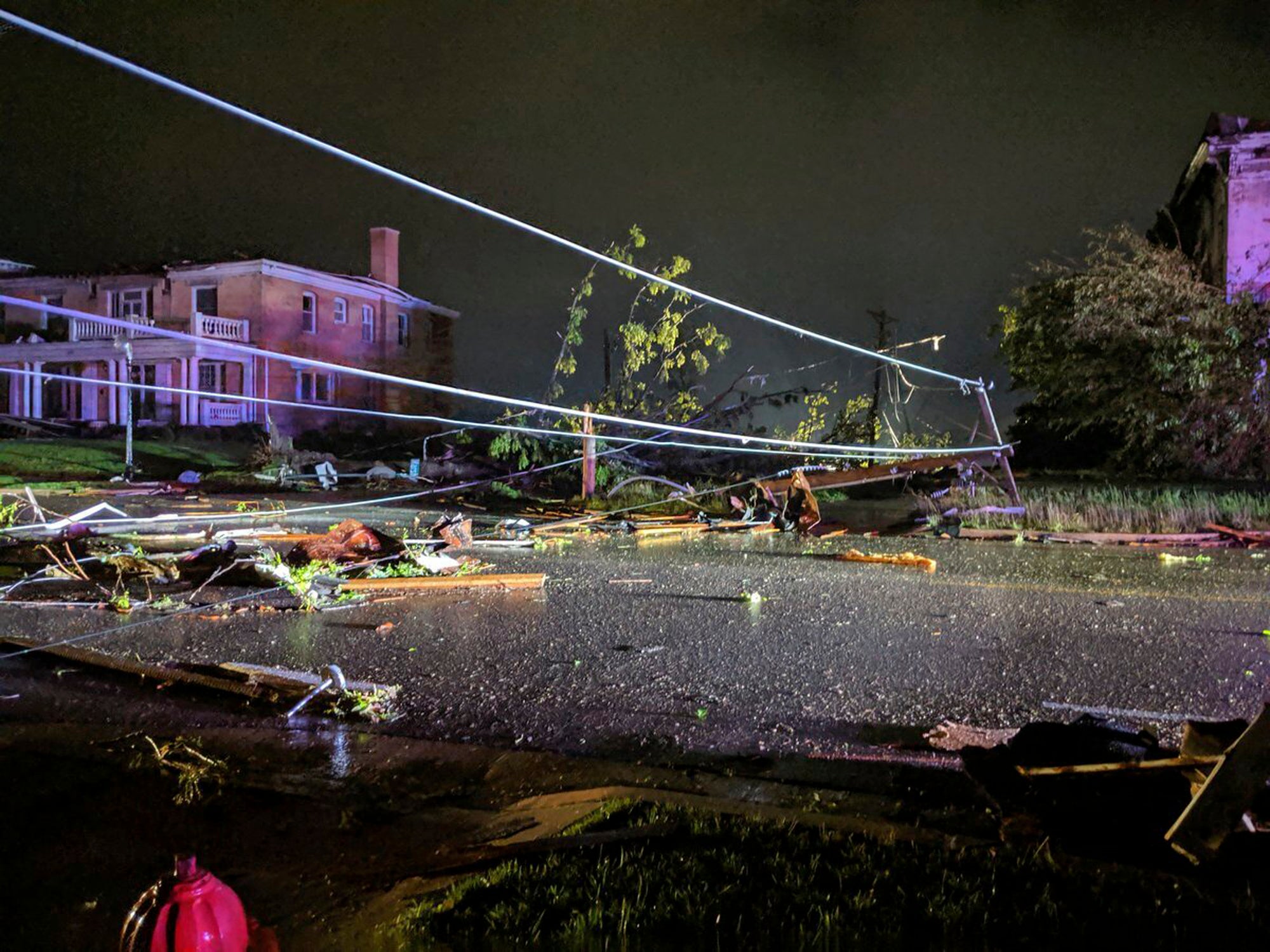 JEFFERSON CITY, Mo. (AP) — An outbreak of nasty storms spawned tornadoes that razed homes, flattened trees and tossed cars across a dealership lot, injuring about two dozen people in Missouri’s capital city and killing at least three others elsewhere in the state.

The National Weather Service confirmed that a large and destructive twister moved over Jefferson City shortly before midnight Wednesday.

The tornado cut a path about 3 miles long and a mile wide from the south end of Jefferson City north toward the Missouri River, said police Lt. David Williams. Emergency workers reported about two dozen injuries, Williams said, and around 100 of people went to shelters. Hospitals reported treating injuries such as cuts and bruises.

There were no immediate reports of any deaths or missing people in the capital city of about 40,000, and it appeared everyone was accounted for after door-to-door checks that were nearly complete Thursday evening, police Lt. David Williams said.

Many in Jefferson City considered themselves fortunate to survive.

David Surprenant watched the storm approach then rushed to join his family in the basement. By then, the windows had started shattering and the pressure dropped.

“It was just the eeriest sound ever, and it felt like it was taking your breath right out of you,” Surprenant, 34, said. He and his family were unharmed.

Kevin Riley operates a car dealership next to Surprenant’s home, where he sells Chevys and Toyotas. He figured that 98 percent of the approximately 750 vehicles on the lot were damaged.

Lincoln University President Jerald Woolfolk rode out the tornado in the basement of her official residence, and it may have saved her life. University spokeswoman Misty Young told the Jefferson City News-Tribune that the home, built 103 years ago, was so badly damaged it appeared to be uninhabitable.

Weather forecasters had been tracking the storm before it arrived, and sirens first sounded in Jefferson City at 11:10 p.m. — about 30 minutes before the first property damage. Gov. Mike Parson credited the warning system for saving lives.

The three deaths happened more than 150 miles away near Golden City in Missouri’s southwestern corner.

Kenneth Harris, 86, and his 83-year-old wife, Opal, were found dead about 200 yards from their home, and Betty Berg, 56, was killed and her husband, Mark, seriously injured when their mobile home was destroyed, authorities said.

The National Weather Service said preliminary information indicates the tornado at Jefferson City was an EF-3, which typically carry winds up to 160 mph.

The severe weather moved in from Oklahoma, where rescuers struggled to pull people from high water. This week has seen several days of twisters and torrential rains in the Southern Plains and Midwest.

Kerry Ann Demetrius locked herself in the bathroom of her Jefferson City apartment as the storm approached.

“It sounded like stuff was being thrown around, everything was just banging together, and then it just went dead silent,” she said. She emerged to find the roof had been blown off her apartment building.

Another natural disaster could be imminent in Jefferson City. Most of the city, including the tornado-ravaged section, sits on a bluff overlooking the south side of the Missouri River. But the swollen river is projected to top a levee on the north side of the river by Friday, potentially flooding the city’s airport, which already has been evacuated.

A tornado also skipped through the town of Eldon, population 4,900, about 30 miles outside Jefferson City, where it damaged the business district and “tore up several neighborhoods,” Miller County Emergency Management Director Mike Rayhart said.

But Mayor Larry Henderson said people in Eldon were counting their blessings: Despite all the damage, just one man was hurt, when the wind flipped his truck. Henderson did not have any details about the man’s injuries.

A twister also caused damage and several injuries in the town of Carl Junction, not far from Joplin, on the eighth anniversary of the catastrophic tornado that killed 161 people in that city. Police Chief Delmar Haase said nearly three dozen homes had significant damage and several people sustained minor injuries. He estimated total damage in Carl Junction was “in the millions.”

The National Weather Service says the EF-3 tornado that hit Carl Junction was among four tornadoes that hit that area of the state Wednesday night over a path of roughly 50 miles. Meteorologist Mark Burchfield in Springfield, Missouri, said Thursday that the tornado that hit Carl Junction was on the ground for about nine miles. He said the deadly EF-3 tornado outside Golden City was on the ground for 12 miles.

The severe weather was expected to push eastward Thursday, with forecasters saying parts of the Ohio Valley and the mid-Atlantic — including Baltimore and Pittsburgh — could see tornadoes, large hail and strong winds.

Storms and torrential rains have ravaged the Midwest, from Texas through Oklahoma, Kansas, Nebraska, Iowa, Missouri and Illinois, in the past few days.

Two barges carrying a total of about 3,800 pounds of fertilizer broke loose Thursday and floated down the swollen Arkansas River in Oklahoma, spreading alarm downstream as they hit a dam and sank. On Facebook, Webbers Falls, Oklahoma, warned the town’s 600 residents: “If the dam breaks, it will be catastrophic!! Leave now!!”

The barges had been floating out of control, on and off again, since Wednesday night near the town of 600, which was under a mandatory evacuation order due to flooding concerns. Aerial footage from the Oklahoma City television station KFOR showed the moment of impact shortly before noon Thursday. The Army Corps of Engineers was checking the dam for damage.

Near Tulsa, about a dozen homes were evacuated as the Arkansas River continued to swell. The potential for further flooding also prompted the HolleyFrontier Tulsa Refinery to temporarily shut down.

Officials in Tulsa said additional residents may be asked to evacuate as the Army Corps of Engineers increases the flow rate at a dam northwest of the city to help drain a watershed flooded by severe storms.

Missouri’s three tornado fatalities bring to seven the number of deaths from storms this week. 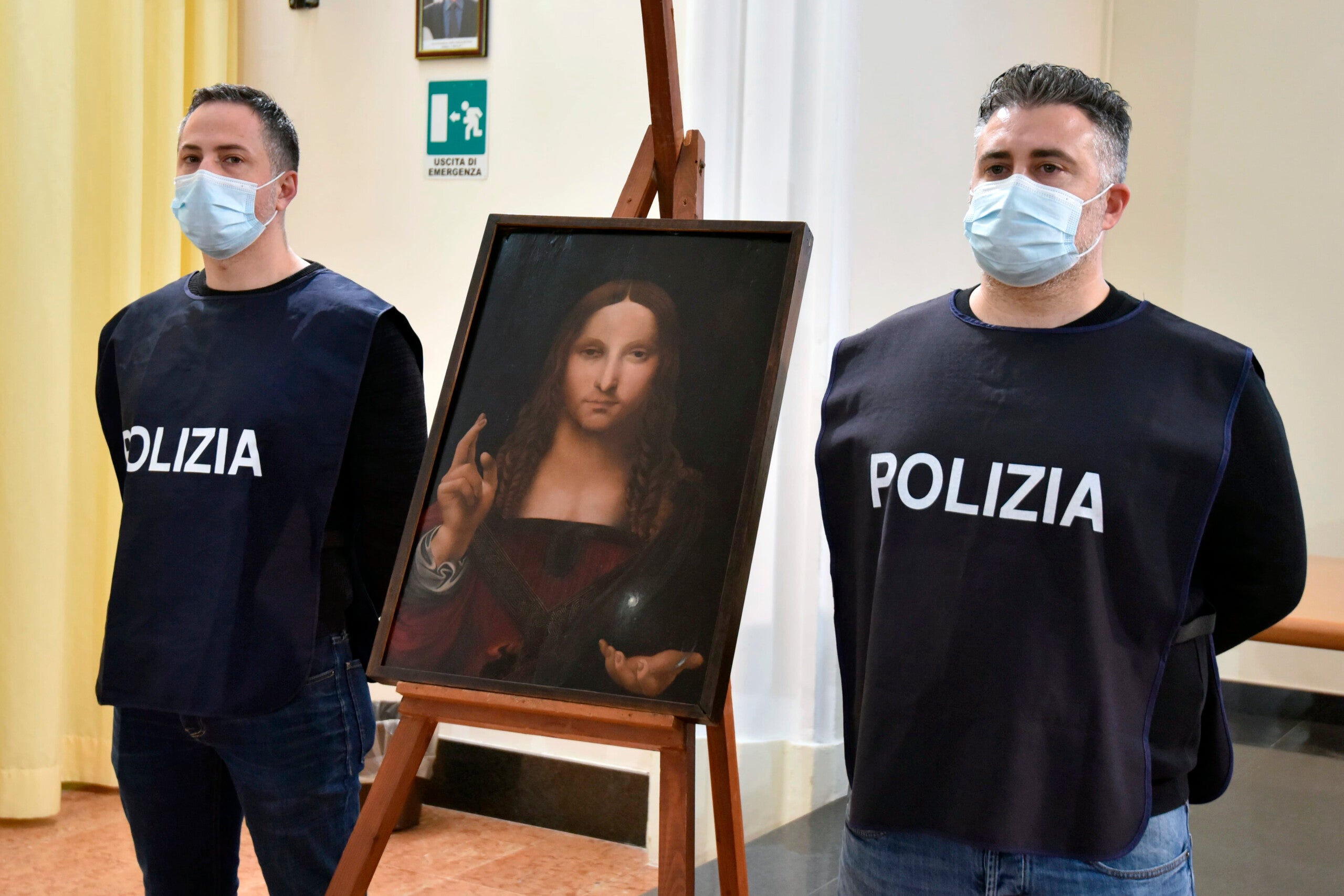