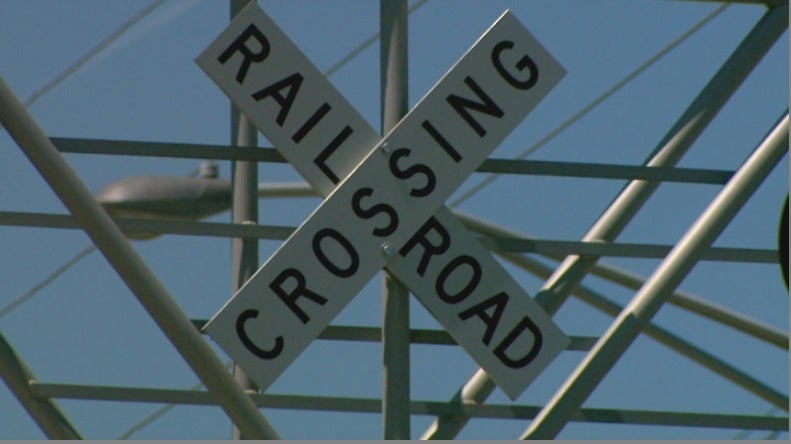 One happened on Pushville Road and the other two on County Line Road.

John Dowd has lived in his home on County Line Road since 1969. The railroad tracks a stone’s throw away. Over the past year, CSX has made improvements to the railroad. As a result, trains go twice as fast and are heavier and longer.

“The high speed-welded rail is quieter than the old clickity, clacking. You don’t get that anymore. It’s smooth. The bad part is people sit on the tracks,” Dowd said.

In Monday’s crashes, police said they are not sure if the drivers tried to beat the trains, their vehicles stalked on the tracks or, on County Line Road, they didn’t hear and see the bells and flashing lights.

“Those trains are going a lot faster and they cannot stop. They’ll stop long after they’ve ripped your car in a half,” Fillenwarth said.

“This is a first. Before, we could go years without a car being struck by a train on those tracks. What’s the thing that has changed over the last year? The speed of the train,” the assistant police chief said.

Leaders said they look to CSX to cover the cost of safety upgrades. According to Greenwood Mayor Mark Myers, adding crossing arms, flashing lights and bells to each intersection would cost up to $325,000.

In a statement, CSX said:

“Our thoughts are with the individuals impacted by the collisions in Greenwood Monday. CSX works diligently to prevent these types of accidents by working to raise awareness about railroad crossing dangers. We want everyone to return home safely at the end of each day, whether they work for CSX or live in the communities we serve. To that end, we conduct regular maintenance and inspections of our tracks, crossings and signals, in line with policies that meet or exceed federal standards. We also work with Operation Lifesaver (https://oli.org/) whose mission it is to end collisions, deaths and injuries at grade crossings and on railroad property, through public education. CSX also trains thousands of first responders every year on how to safely respond to rail incidents. In fact, we conducted this training in the Greenwood area less than two years ago, and we appreciate the efforts of those local first responders during Monday’s collisions. Finally, we have been advocating and working with INDOT and House and Senate leadership on the Local Trax Program, which passed in the 2017 legislative session and provides over $100 million for Indiana communities to fund grade crossing warning device upgrades and improvements.

“CSX is cooperating will local law enforcement investigating Monday’s collisions, and we are committed to working with communities like Greenwood to enhance the safety of both drivers and trains.”

At Dowd’s home, he can’t control much beyond his driveway. But, he had a message for drivers.

“Somebody up there likes somebody because nobody got killed. Somebody was paying the preacher off,” the County Line Road resident said.

The assistant police chief in Greenwood said he could not give condition updates on the three drivers. He said one, an elderly woman, had been in surgery on Tuesday.