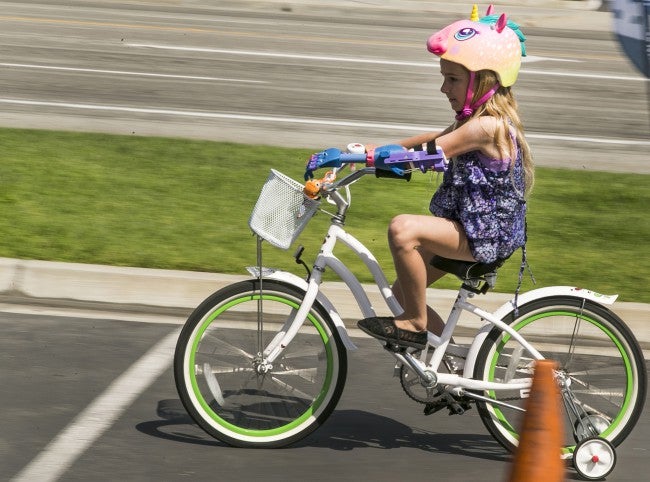 LOS ALAMITOS, Calif. (AP) – Seven-year-old Faith Lennox never thought much about putting a prosthetic limb where her missing left hand had once been.

Not until the little girl learned she could design her own, strap it on easily and then jump on her bike and pedal away at speeds previously only imaged.

With family members occasionally shouting “Be careful” and “Watch out for that car,” Faith firmly placed her new hand’s bright blue and pink fingers on her bike’s left handlebar and took off for a seemingly endless sojourn around the Build It Workspace on Tuesday morning. Inside, just a short time before, that hand had rolled off a 3D printer that built it overnight.

“I don’t think we’ll ever get her off it,” said her mother, Nicole, smiling with resignation as she watched her daughter continue to circle the parking lot in this Orange County suburb.

The prosthetic that had just made such a task immediately easy represents a breakthrough in small, lightweight hands that are economical and easy for children to use. It weighs only a pound and costs just $50 to construct out of the same materials used to make drones and automobile parts.

When Faith outgrows it in six months or a year, a replacement can be made just as cheaply and easily, said Mark Muller, a prosthetics professor at California State University, Dominguez Hills, who helped with the design. He said a heavier adult model with sensors attached to a person’s muscles would run $15,000 to $20,000.

Faith manipulates her hand without sensors. Instead, as she happily demonstrated over and over after the bike ride, she moves her upper arm back and forth.

That in turn opens and closes its blue and pink fingers – “my favorite colors,” she noted with a smile – that she uses to grasp objects like the favored plush toy she brought with her.

The oldest of three children, Faith had compartment syndrome when her position during childbirth cut off the flow of blood to her left forearm, irreparably damaging tissue, muscle and bone. After nine months of trying to save the limb, doctors determined they had to amputate just below the elbow.

She had tried a couple more traditional – and more expensive – prosthetics over the years but found them bulky, heavy and hard to use.

Her parents were working with the nonprofit group E-Nable to get her a 3-D-printed hand, but the technology is so new there’s a waiting list, her mother said. Then she learned of what Build It Workspace could do from a friend whose son visited with his Scout troop. The small studio teaches people to use high-tech printers, provides access to them for projects and does its own commercial printing.

Although the company, founded less than a year ago by mechanical engineer Mark Lengsfeld, has printed out everything from pumps for oil and gas companies to parts for unmanned aerial vehicles, this was the first hand Lengsfeld and his employees had built.

So he used E-Nable’s open-source technology and called in Cal State, Dominguez Hills’ experts for guidance.

When Faith quickly strapped on their new creation and headed out to ride Tuesday morning, as TV cameras captured the moment, Lengsfeld admitted he was nervous. After being up all night finishing the hand, he wanted to test it himself to be sure it worked.

“But she did fine with it,” he said, chuckling.

She noted it did fine by her as well.

“I didn’t have to lean so much,” she said of the difficulty of navigating and steering a bike with just one hand.

Afterward, as more than a dozen reporters and photographers, as well as school and city officials, family friends and others, crowded into Build It’s small studio, the little girl sat shyly in front of a huge poster reading “Hand It To Faith” that Lengsfeld had made for her.

But when asked to demonstrate how she can use the hand to help with things like schoolwork, she got busy. She placed her new hand firmly on a piece of paper, holding it in place as she drew a picture.

And just what did she draw? Her new hand, of course, complete with robot fingers in perfect detail.