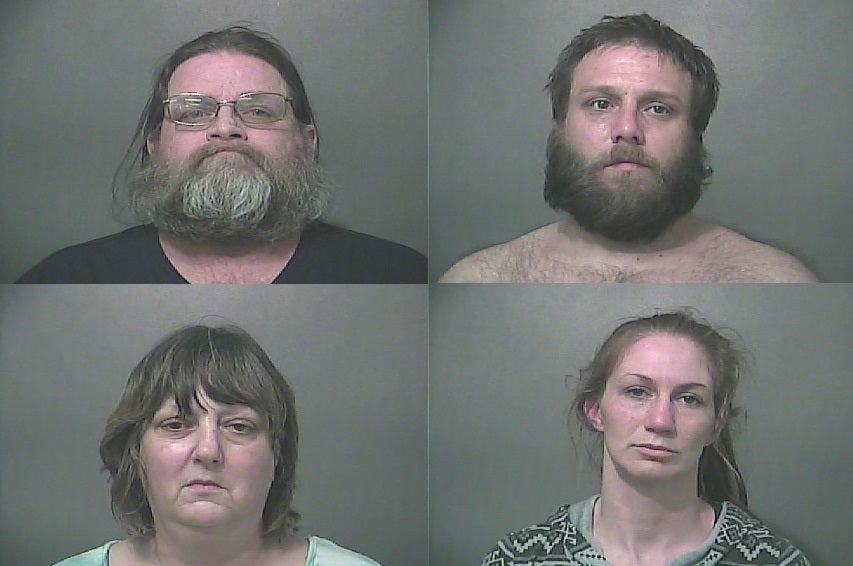 VIGO COUNTY, Ind. (WISH) – Four people from Rosedale, Indiana were arrested in connection with the brutal death of a 9-year-old boy.

Hubert and Robin Kraemer were the guardians of the child and have raised him since he was three-days-old.

The victim’s biological parents have been notified, but according to authorities they were not willing to provide a statement.

Sheriff Greg Ewing released details about the case Wednesday night at a press conference at the Vigo County Sheriff’s Department.

According to authorities, on Tuesday at 3:55 a.m., the Vigo County Sheriff’s Office and other emergency personnel were sent to the 11300 block of Lewsader Avenue after reports of cardiac arrest. After police and medics arrived, they found 9-year-old Cameron Hoopingarner. He was transported to Union Hospital, where he was later pronounced dead.

After the boy was transported to the hospital, a criminal investigation was conducted at the home. As a result of that investigation, an arrest and search warrant was executed at 5:10 p.m.

The four are facing the following charges:

Authorities say the 9-year-old boy had cerebral palsy and was blind. He weighed 15 pounds and was severely malnourished. He was in reportedly terrible condition when officials were called to the residence.

Experts are calling it the worst case of child abuse they’ve ever seen. By the time Hoopingarner arrived at the hospital, he was already dead. His official cause of death is starvation.

Sharon Pierce is the president and CEO of Villages of Indiana, which also has a child abuse prevention division.

“At 15 pounds, most one-year-olds weigh at least 15 pounds and to think this was a 9-year old who was not nurtured,” she said.

“His death, sadly, provides a huge call to action for all of us in our neighborhoods, in our communities, in our faith communities,” she said.

Pierce believes there are things we can all do, to help prevent child abuse, “Most of us get a gut feeling that there might not be something right and I think on behalf of these children we need to act on that.”

Pierce encourages neighbors to be on the look out for things like:

Two other children ages five and three were removed from the residence and placed in protective services. According to officials, they are the children of Chad Kraemer and Sarah Travioli.

The individuals are due to appear in court Thursday at 1:30 p.m.