4 charged with burying boy alive, having sex near murder scene 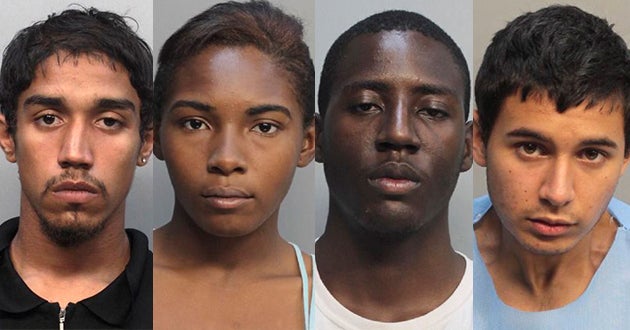 HOMESTEAD, Fla. (AP) – Four South Florida vocational school students have been charged with second-degree murder after their classmate was attacked with a machete and left to die in a shallow grave near the school, according to an arrest report.

Jose Amaya Guardado, 17, made one last attempt to fight back while lying wounded in the hole dug by the teens days earlier, authorities said. But one of the suspects kept striking Guardado until his face “caved in,” Miami-Dade police wrote in an arrest report Wednesday.

The suspects were students at Homestead Job Corps, a live-in school and vocational training program for at-risk students run by the U.S. Department of Labor. Police detailed the gruesome killing in an arrest report for Desiray Strickland, noting that she complained about missing the start of the beating because she walked away to use the bathroom. Authorities say Strickland and another suspect stayed behind after the killing to have sex, according to the arrest report.

The suspects cleaned up the scene, burned the victim’s belonging and their own clothes and got rid of the weapon, authorities said.

Arbelo, Lucas and Colon all confessed when they were detained last week, police said. The warrants detailing their arrests remain sealed by the court. Attorneys listed for the suspects in court records did not return emails Thursday evening.

Family members had been searching for Guardado, who had been missing since June 28. His brother discovered his body in the woods not far from the vocational facility. Relatives described Jose as a “peaceful” boy who worked at a flea market selling ice cream.

Law enforcement officials told The Miami Herald that the students were part of a group of bullies within the federally operated school. Authorities have not released details of a motive, but told the newspaper it may have stemmed from some type of debt that the victim owed to Arbelo.

In a statement released Wednesday, a Labor Department spokesman said security is their top priority.

“Steps already have been taken to strengthen security at the Homestead center, and Job Corps is reviewing safety and security at all its centers,” said spokesman Stephen Barr.

Meanwhile, police said Strickland refused to cooperate after her arrest, alleging she shoved an investigator and head-butted his chest before they shackled her. Police also said she tried to use screws from an electrical outlet to try and pick her handcuffs, then scrawled “MPD Go to Hell” on a table, the report said.

Strickland also was charged with resisting an officer with violence, battery on an officer and criminal mischief.

Information from: The Miami Herald, http://www.herald.com