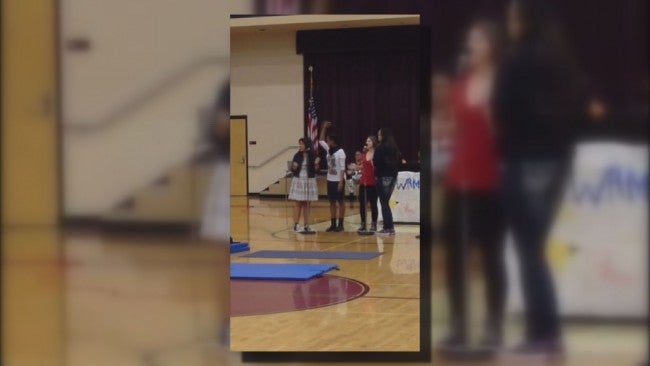 TIPPECANOE CO., Ind. (WLFI) – At least one Tippecanoe County middle school parent is upset that her daughter’s college scholarship could have been in jeopardy after a recent suspension.

Not for fighting or bullying, but for singing a song in a talent show.

The song was “Pompeii” by the group Bastille. It’s not vulgar or profane. But it wasn’t approved by teachers. For that, four girls at Wea Ridge Middle School were suspended for three days.

Yet, just 72 minutes after WISH-TV’s sister station WLFI contacted the principal, the suspensions were removed from the students’ records.

When one watches the end-of-year talent show at Wea Ridge Middle School, nothing seems wrong. Twice, a teacher even comes up to try to fix the microphone for the girls singing.

But just an hour or two later, when all four were suspended for the final three days of school, two parents tell WLFI they were told their daughters singing caused “riotous behavior.” While the principal later corrected that impression, the suspension stayed, for what parents were told was a premeditated violation of the teacher’s trust.

“We thought we would get maybe yelled at, but not as bad as they made it to be,” said Emily Welman, one of the performers.

They had been approved to sing Leonard Cohen’s “Hallelujah.” Instead, without permission, they sang “Pompeii,” a track that hit No. 5 on the Billboard Chart.

Though Welman tells WLFI she and her friends should not have been punished at all, Martin along with another singer’s mother disagree. But with the three-day suspension amounting to an expulsion, it could have put Welman’s status as a 21st Century Scholar at risk.

Martin said her daughter and the others should have been disciplined, but less severely. “Maybe an in-school suspension, maybe a lunch detention,” she said.

“I think a detention would have been totally appropriate,” adds DeAnna Zimmerman, another mother of a performer. “I would not have argued a detention at all, because they knew, they knew. They shouldn’t have changed the song without permission.”

After several days of communications with various Wea Ridge and Tippecanoe School Corporation officials, nothing had been done.

So they contacted WLFI.

One hour and 12 minutes after WLFI sent an email to Principal Cory Marshall, he emailed the mothers at 10:43 p.m. saying that the suspension would be removed from the students’ records.

“I just find it interesting that after you were contacted, that’s when things got taken care of,” said Martin. “Especially, that late at night”

Though there should be no lasting effect to their records, the move comes too late for school, which let out for the summer eight hours earlier than Marshall’s email.

“I think the timing is extremely convenient for them. They were still allowed to enforce the punishment that they wanted to enforce,” said Zimmerman. “There’s nothing there that gives me any kind of assurance that it’s not going to happen again in the future.”

But for Welman, who started summer vacation a little early, feels a little differently.

“I’m happy now that it’s off my record,” Welman said.

Marshall and Tippecanoe School Corporation Superintendent Scott Hanback both refused to be interviewed about this story.

In an emailed statement, Marshall said:

We did have a student discipline situation at our school involving our school talent show where several students made a poor choice, and, as the school administrator, I am holding them accountable for their actions. I will not disclose any private or protected information about these students or any of our 635 other students. It is always my hope that students learn from their mistakes and that positive life lessons can be found in any situation.  We have always maintained open lines of communication with the parents/guardians of our students, and we will continue to do so, particularly in situations such as these.