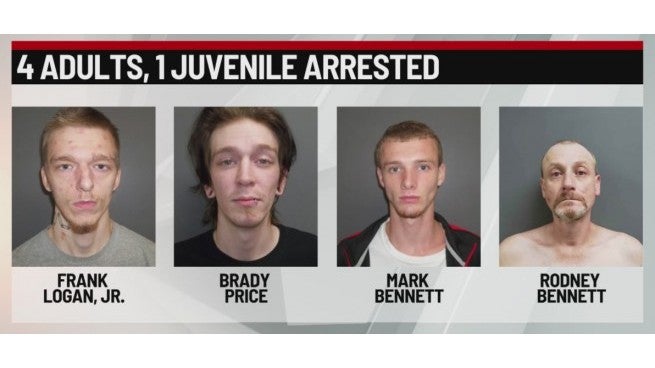 CONNERSVILLE, Ind. (WISH) — Four men and a boy now face charges in relation to a homicide at a Fayette County trailer park.

Fayette County Sheriff’s Office said Sunday in a Facebook post that 37-year-old Frank Logan Jr. and 22-year-old Brady T. Price are the latest to be arrested.

Logan was captured early Sunday after police surrounded a home in the 1900 block of Old U.S. 52 in Laurel, Indiana. Logan ran from an outbuilding, but was eventually taken into custody, the post said.

Logan faces a murder charge in the homicide of 37-year-old Michael Shane Hamilton. The sheriff’s office said he was killed just before 1 a.m. Sept. 20 at the Elephant Hill Trailer Park.

Price faces a charge of assisting in a robbery with a deadly weapon resulting in death.

Both men were in the Fayette County Jail with no bond.

A 16-year-old boy was arrested in connection with the crime Friday night. The juvenile was preliminarily charged with a felony count of murder.

Connersville is about 50 miles east of Indianapolis.