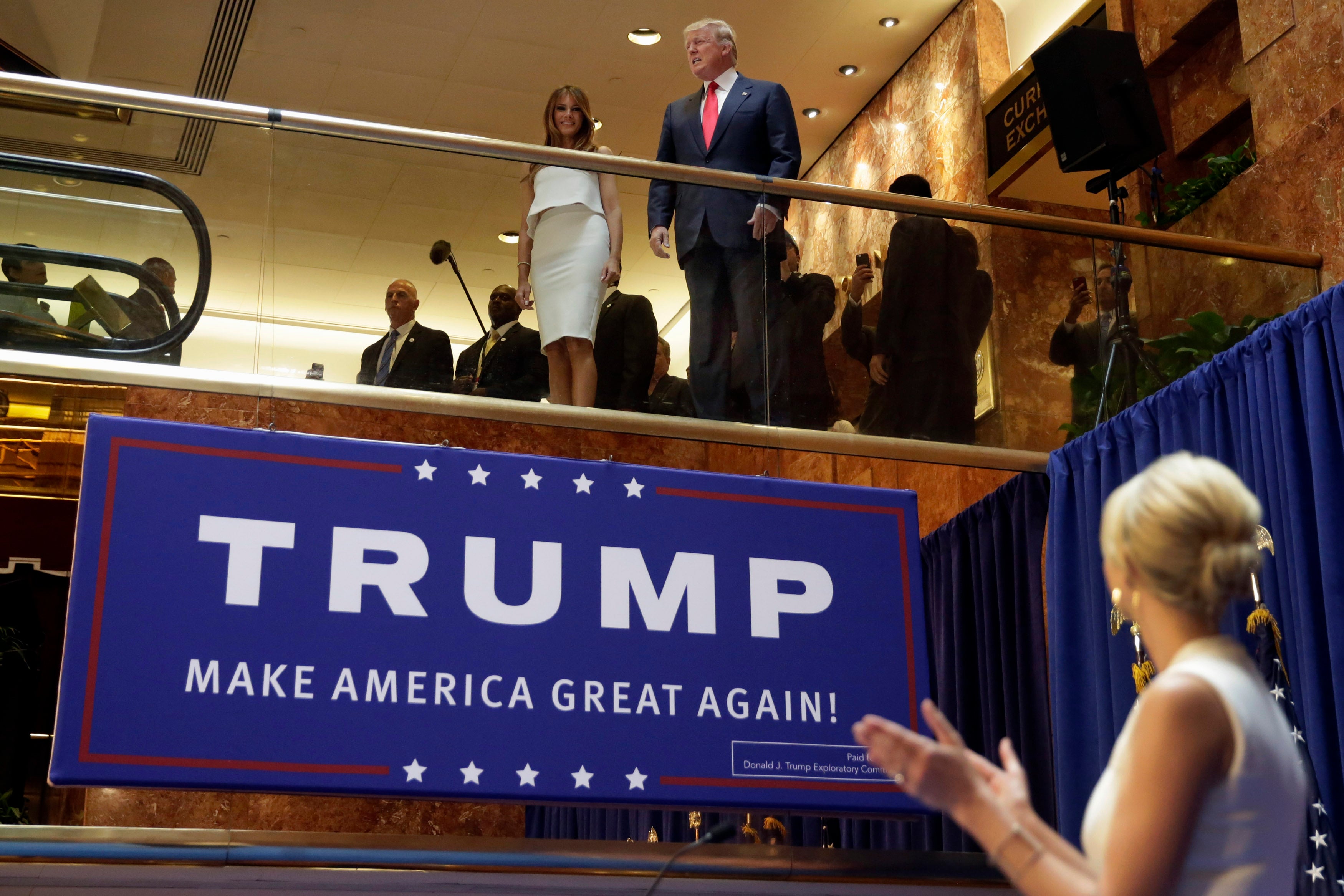 NEW YORK (AP) — It was the escalator ride that would change history.

Four years ago on Sunday, Donald Trump descended through the pink marble and brass atrium of Trump Tower to announce his candidacy for president , the first step on a journey few believed would take him all the way to the White House.

It turns out the 2015 event might not have happened, at least not on June 16. And the over-the-top staging that featured a crowd including paid actors could have been even more theatrical if one early idea hadn’t been scrapped.

(Trump nixed suggestions to feature a live elephant. “Too political,” he decided.)

Now, the president who loves to reminisce about that “famous” Trump Tower moment is trying to recreate the magic as he formally launches his re-election bid Tuesday in Florida. Four years in, Trump still is echoing much of the same divisive rhetoric he let fly when he ditched the speech prepared for that original campaign kickoff.

His 2015 announcement, according to those involved in the effort, was a classic Trump production aimed at highlighting all the things that made Trump, well, Trump: his brashness, his wealth and his skill for lighting rhetorical fires and watching the press scramble to respond.

Trump had been in Europe playing golf the week before his scheduled announcement, with plans to return in time to go over remarks written by his ragtag team of early staffers.

“I get a call while he is in Europe and he asked, ‘What do you think about postponing this a little?'” recalled Sam Nunberg, an early campaign adviser. But the press already had been invited, trips to early-voting states planned and the timing — a day after assumed front-runner Jeb Bush’s announcement — seemed ideal.

And there was fear among advisers that any delay would trigger talk of cold feet about a campaign some observers doubted would ever happen because Trump had already flirted with, but then bailed on, previous bids.

“I tell him, ‘We can’t do that. We have set this date. If we postpone it, it would be covered that you got cold feet and you would not be taken seriously,'” said Nunberg. “I told him that postponing would be like Madonna not performing at MSG on a show day,” referring to New York’s Madison Square Garden.

So the show went on. Trump and his wife, Melania, emerged from an upper level of Trump Tower and descended the “famous” escalator, with the future president offering thumbs-ups and waves. It was a scene Trump had carefully crafted, paying frequent visits to the lobby as crews worked through the night to erect press risers, build the stage he would stand on and polish every inch of marble and brass.

A speech had been written. But Corey Lewandowski, Trump’s first campaign manager, wrote in his book, “Let Trump Be Trump,” that the candidate “gave a quick look at the sheet of paper Corey handed him, folded it up, and put it in his breast pocket, never to look at it again.”

“I never forget standing on the famous escalator, you know the escalator, right?” he likes to tell crowds. “Remember the scene with Melania in front of me waving very elegantly and Trump coming down, waving less elegantly? But I just took a deep breath and I said, ‘Let’s go do it. Let’s make this country great,’ because it takes guts. It takes guts. And I’m so glad I did it.”

And four years later, the speech Trump delivered, following an introduction from his eldest daughter, Ivanka, sounds just like one he would deliver today.

“Our country is in serious trouble. We don’t have victories anymore,” Trump told the crowd, railing against China for “killing us on trade” and promising to build a “great, great wall” along the U.S.-Mexico border that the American ally would pay for, “Mark my words.”

“When Mexico sends its people, they’re not sending their best,” Trump said in one infamous line. He panned Obama-era unemployment statistics as “full of nonsense” and described himself as “really rich.”

Trump, said Roger Stone, another longtime adviser, “orchestrated every minute detail of his announcement,” including vetoing a suggestion from his former personal attorney Michael Cohen to decorate the lobby with red, white and blue bunting and feature a live elephant to add to the circus.

Trump “decided to come down the escalator and worked from his own handwritten notes rather than a prepared text,” said Stone, insisting that, “then, as now, Donald Trump does not have handlers or managers or chief strategists.”

That included scrapping aides’ ideas on what he should wear.

“He asked me about a black suit. I said, ‘Yes, that’s iconic, that’s ‘The Apprentice,'” recalled Nunberg. Trump disagreed. “He said, ‘You’re a moron. Blue is better. It works better with the flags.’ He was right.”

Trump was thrilled with the speech’s reception and later remarked on how successful the day had been for his brand. “How great is this for Trump?” Nunberg recalled the candidate saying at one point.

It helped, of course, that some in the crowd had been paid to be there. Extras were offered $50 to “wear t-shirts and carry signs and help cheer” in support of Trump’s announcement, according to a casting call email obtained by The Hollywood Reporter.

The ploy was first discovered by Angelo Carusone, now president of the progressive Media Matters group. Carusone said after the event, he was struck that, at a time of selfie obsession, he couldn’t find anyone who had posted photos of themselves attending the event.

“That was weird,” he remembered thinking. “People who care about a presidential press announcement are going to post selfies,” he said. He finally came across a single photo posted by a man who worked as an extra and taken with a woman who appeared to do the same.

Trump’s campaign has never acknowledged knowingly hiring actors, but did acknowledge paying $12,000 to Gotham Government Relations, a firm that was said to have hired the Extra Mile Inc. casting company, according to a complaint filed with the Federal Election Commission.

Neither Gotham nor GMLV Casting, which took over Extra Mile, responded to requests for comment in recent days.

While some in Trump’s orbit suggested a return to Trump Tower for his re-election announcement, the president will head to Orlando — in a state he must win to secure a second term.

This time, there will be no need to hire actors. Trump and his campaign say 100,000 tickets have been requested for Tuesday’s event at the 20,000-seat Amway Center. The event will feature a pregame show with food trucks, live music and jumbo screens to pump up the crowd.