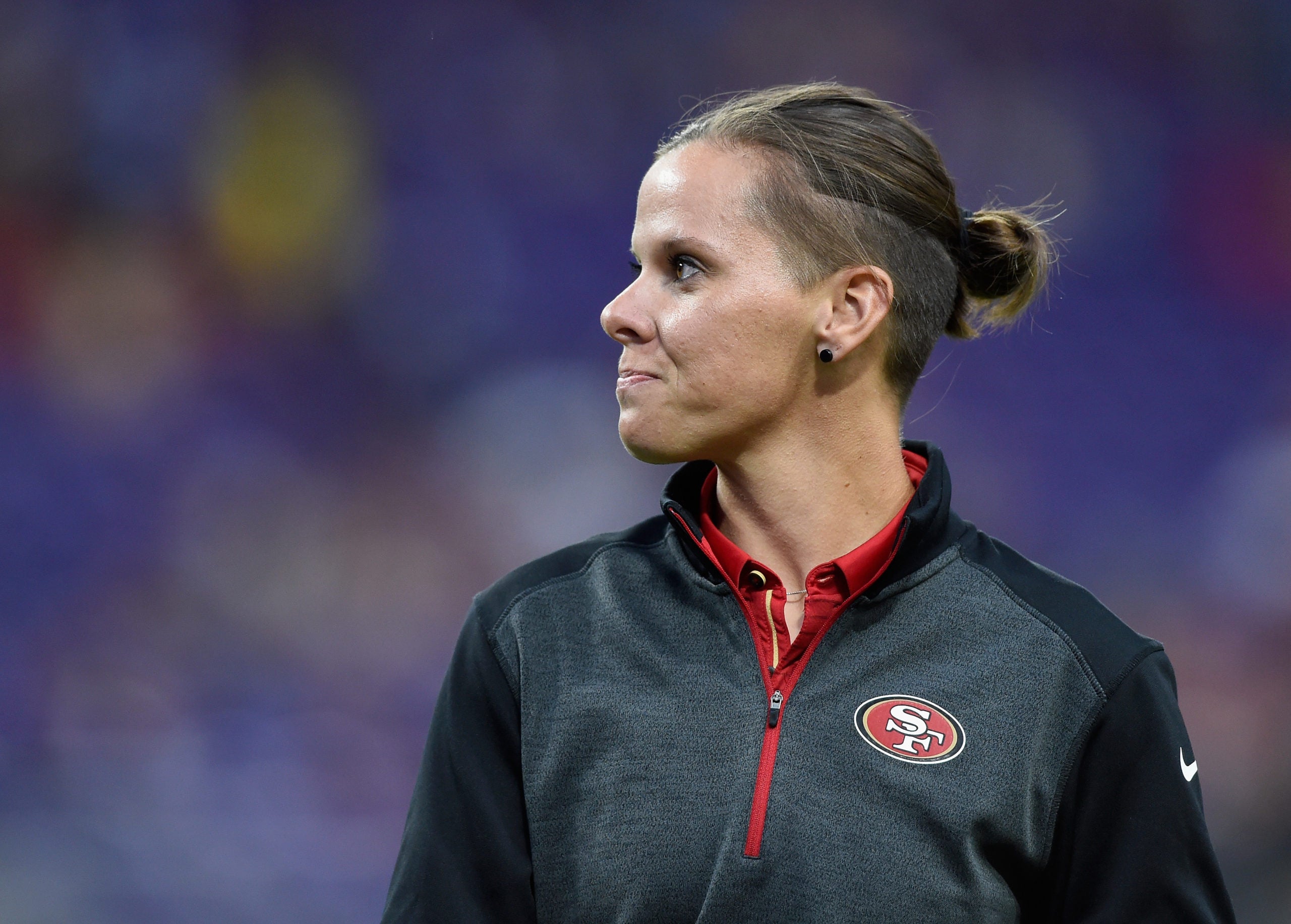 In a historic move at the time, the NBA’s San Antonio Spurs hired Becky Hammon as an assistant coach. Katie Sowers took notice, posting on Twitter a picture of herself, saying, “Coming for the NFL.”

Now, Sowers is making history herself, becoming the first woman and openly gay person to coach in a Super Bowl. Sowers is in her fourth season in the NFL and is an offensive assistant with the San Francisco 49ers.

“She has done a hell of a job,” 49ers head coach Kyle Shanahan said to NBC Sports Bay Area.

In a prominent Microsoft Surface commercial, Sowers, now in her 30s, shared a letter she wrote to herself as a child.

“I hope someday I will be on a real football team,” she said.

Later in the commercial, as a 49ers coach, she said, “I’m not just here to be the token female. I’m here to help us win.”

Rejected because of her sexual orientation

Sowers was born in Hesston, Kansas, a community of roughly 3,800 people north of Wichita. She grew up playing football with her twin sister, Liz. The games were informal, backyard football with the boys.

“There was no question about playing or not playing,” Liz Sowers told NBC Sports Bay Area. “It was just, we played. That’s it.”

Sowers attended Hesston College and then Goshen College in Indiana, graduating in 2009. She earned her master’s degree in kinesiology from the University of Central Missouri in 2012.

At Goshen, which is affiliated with the Mennonite Church, Sowers competed in soccer, basketball and track and field. It was then when she came out to family and friends.

“When it came to me coming out to my parents, it was nothing but love and acceptance,” Sowers told NBC Sports Bay Area.

When her collegiate playing days ended, Sowers asked about taking a position as a volunteer assistant coach on the Goshen women’s basketball team. She said she was turned down based on her sexual orientation.

“With coaching being my final destination, in terms of what I wanted to do, I thought it would be natural to ask if I could be a volunteer assistant coach, and my coach called me in and he said they have a lot of parents that have been worried about their daughter being around someone who is gay … ” Sowers said to NBC Sports Bay Area. “So that’s not something that they would want around the team. So, he asked that I would not be around the team anymore.”

“I was near tears. He gave me a hug and he said, ‘It’s nothing personal,’ and I remember hugging him but being extremely upset. It was just something that I grieved about for a while, but I decided that I had to move on.”

Goshen College president Rebecca Stoltzfus released a statement Wednesday, saying, “Sadly, in 2009, our policies and the laws of Indiana allowed for hiring decisions to consider sexual orientation. I am glad that Goshen College adopted a new non-discrimination policy in 2015, and I am thankful for the leaders before me who brought this change about, not the least of whom were our students and alumni.”

Sowers said after the rejection from Goshen that she felt lost — but that it ultimately pushed her to play in the Women’s Football Alliance with her twin, Liz.

“It led me to a second chance at the game that I originally loved the most,” Sowers told NBC Sports Bay Area.

Sowers played eight years in the Women’s Football Alliance, first for the West Michigan Mayhem and then for the Kansas City Titans in Missouri. She later became the Titans’ general manager.

Those playing in the Women’s Football Alliance are truly in it for the love of the game. They pay to play; there are no salaries. So Sowers, who also was a member of the US Women’s National Football Team in 2013, took on a job coaching youth girls basketball in Kansas City.

Pioli told NBC Sports Bay Area that it took some time to get the Falcons on board. But in 2016, with Pioli’s help, Sowers spent the offseason and training camp with Atlanta through the Bill Walsh Diversity Coaching Fellowship.

“Finally the year came where they decided that hey, this was a good idea, and then Kyle Shanahan, our offensive coordinator at the time, was 100% on board having her work on the offensive side of the ball,” Pioli said.

After Shanahan left for the 49ers head coaching job in 2017, Sowers, again through the fellowship program, went on to follow him to the Bay Area.

“I loved having Katie around, loved her the year I had her in Atlanta,” Shanahan said to NBC Sports Bay Area. “Some of the coaches came to me at the end of (training camp) and told me how much she’s helped and if there was a spot for her to keep her around.”

That fall, Shanahan hired Sowers as a seasonal offensive assistant, making her, according to the NFL, the second woman to ever hold a full-time coaching position league history.

“It’s important for all to know that dreams are achieved by first finding someone who sees your worth and value, regardless of your gender, and takes the necessary steps to clear a path, even on the path less traveled,” Sowers wrote. “Those people are hard to find, but I was blessed to begin my journey in the NFL because of a close friend and mentor in Scott Pioli.

“Scott’s passion for equal opportunity and his belief in a small town girl from Kansas, allowed me the opportunity to follow my passion. Scott continues to do amazing work, opening doors and breaking down walls in the NFL that for years have shut people out. I think we could all learn a little from people like Scott Pioli and find a way to open doors for those behind us.”

Pioli said in a recent tweet that he simply cultivated an unconditional relationship with Sowers.

“I provided her with my mentorship and an opportunity – SHE has done the work and proven herself!” Pioli wrote.

‘Be true to who you are’

In 2017, in an interview with Outsports, Sowers came out as the NFL’s first openly LGBT coach, male or female.

“No matter what you do in life, one of the most important things is to be true to who you are,” Sowers, told Outsports at the time. “There are so many people who identify as LGBT in the NFL, as in any business, that do not feel comfortable being public about their sexual orientation.

“The more we can create an environment that welcomes all types of people, no matter their race, gender, sexual orientation, religion, the more we can help ease the pain and burden that many carry every day.”

Lately, there’s been talk about diversity — or the lack thereof — in the coaching ranks in the NFL. The Rooney Rule, named after the late Dan Rooney of the Pittsburgh Steelers, has been in place since 2003. It requires every team with a head coaching vacancy to interview at least one or more diverse candidates.

However, just three of the NFL’s 32 head coaches — Anthony Lynn (Los Angeles Chargers), Brian Flores (Miami Dolphins) and Mike Tomlin (Steelers) — are black. New Washington head coach Ron Rivera, who is Hispanic, is the only minority who was hired when there were five recent head coach openings. Chris Grier of the Miami Dolphins is the only general manager of color.

“No matter how much people say about it, no matter how much people say the Rooney Rule, ‘You have to interview these guys,’ the coaches still look a certain way for the most part. Every now and then there will be coaches, owners that go out of the norm and hire some coaches. I think it’s unfortunate because there’s a lot of qualified, very qualified, coaches of color and female coaches that deserve a job, deserve to get the opportunity to be head coaches. I think sometimes in this game it gets into the cycle of just old school.”

But the players don’t all think that way, and it’s evident with Sowers.

“She been tremendous,” 49ers quarterback Jimmy Garoppolo said earlier this month. “Katie was here before I was, but just what she does with the receivers, all the skill positions guys, how she interacts with them, it’s special. She’s feisty … Katie’s awesome out there. She’ll get after guys. It’s fun to be around.”

‘Nothing about what I’m doing is typical’

It wasn’t exactly an opening of the floodgates, but in 2015, when the Arizona Cardinals hired Jen Welter for the team’s coaching staff to work with the Cardinals’ inside linebackers and to coach throughout training camp and the preseason as a training camp/preseason intern, NFL teams took notice. The Buffalo Bills then hired Kathryn Smith, who was a special teams quality control coach for the team in 2016. Then came Sowers, in 2017.

In the 2019 season, there were eight women who coached, including four in a full-time role: Sowers, Javadifar, Locust, and the Buffalo Bills’ Callie Brownson.

With her persistence, Sowers has made it into the league. But, with the Super Bowl on the horizon, she has more to achieve. And it’s coming against the team closest to her hometown.

“Unreal night,” Sowers wrote on Twitter after the 49ers beat the Green Bay Packers to win the NFC championship game. “Takin our talents to South Beach … Niners vs Chiefs … I couldn’t ask for a better game.”

In an interview with Hesston College in 2016, when she was with the Falcons, Sowers talked about her career goals.

“My long term goal is to be a head coach and then move on to executive management,” Sowers said at the time. “It’s not a typical path, but then again, nothing about what I’m doing is typical.”