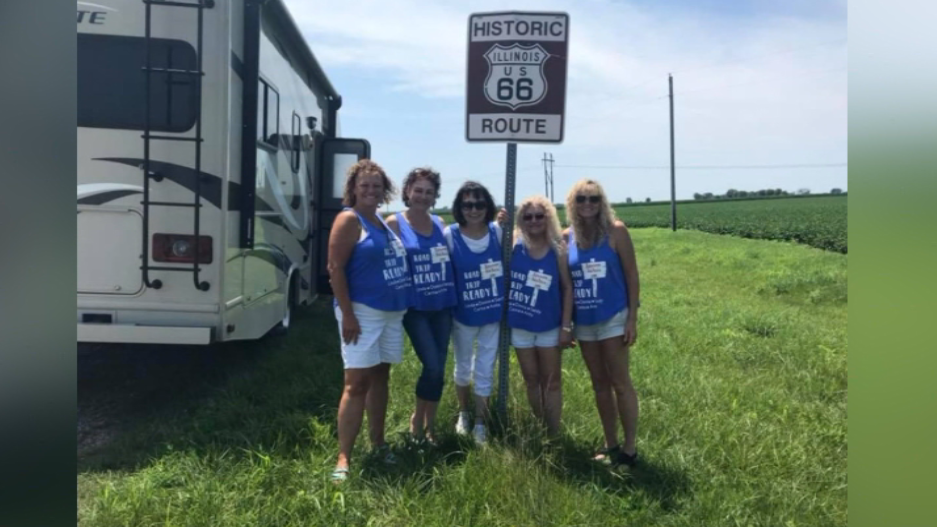 Linda Briles, Donna Norton, Carma Reidy, Sandy Leer and Anita Langdon described their road trip this summer as “the experience of a lifetime” and said they became closer after spending 19 days together in an RV.

The Hartford City sisters set out on Route 66 in Springfield, Illinois and traveled to the “End of the Trail” in Santa Monica, California driving about 350 miles a day. Their parents had taken the same route 54 years prior, when the family briefly relocated to Santa Ana.

“My father wanted to be there before he was 40, so there we went,” said Briles. “We put everything that we owned in [the car] and we took off.”

Their mother was pregnant with Langdon, the youngest of the sisters and the only one born in California. She was a year old when the family moved back to Indiana and, unlike her elder siblings, has no memories of living in the Golden State.

“It just felt like part of me was missing, not knowing about the place I was born,” Langdon told News 8. “I’ve wanted to visit California as far back as I can remember.”

She said finding the two-bedroom house in Santa Ana where she had spent the first year of her life was “deeply emotional.” Finally visiting the places she had only heard about from her sisters and seen in family photos marked a personal turning point for Langdon.

“I feel complete now,” she explained, wiping away tears. “Certain things would make me cry [like] standing in front of the house.”

The trip was also filled with lighthearted moments; a favorite memory for all the sisters was the panicked reaction of Norton when she mistakenly thought no one was behind the wheel of the moving RV.

“It was a senior moment!” she laughed. “I’m happy we were all able to do this before we get too old to enjoy it. I was the one that was kind of dragging my feet but I knew that I didn’t want to miss this. This was something that would never be the same with one of us missing.”

The sisters visited nearly every major landmark along Route 66, including the Grand Canyon, Petrified Forest National Park, Badlands National Park, the Route 66 Museum, DeSoto’s Salon, trading posts in the southwest and Standin’ on the Corner Park in Winslow, Arizona.

“The best part of the trip was probably the people we met everywhere we stopped,” said Briles. “Or just getting to spend time with my sisters.”

The sisters’ advice to anyone with a family adventure or road trip on their bucket list? “Stop waiting. There’s never a convenient time to drop everything and travel. Just make it happen.”