5-vehicle crash shuts I-65 near Columbus for hours 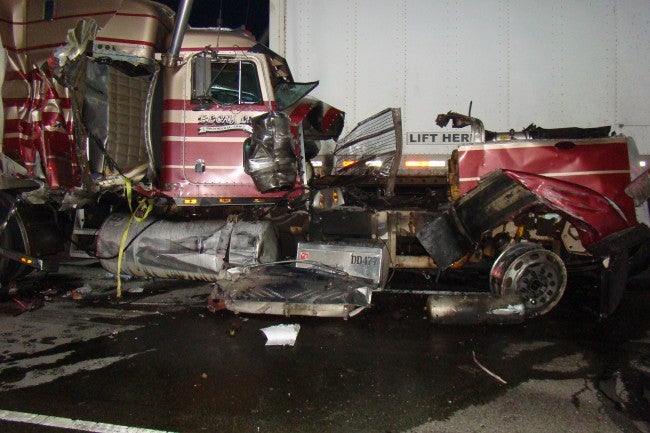 BARTHOLOMEW COUNTY, Ind. (WISH) — A crash between three semis and two cars injured five people at the 65 mile marker of southbound I-65 in Bartholomew County Thursday evening, according to Indiana State Police.

ISP believes 65-year-old Robert Young Jr. was driving a maroon 1998 Peterbilt tractor southbound on I-65 when he rear ended a Chevy S-10, driven by Richard Blum, causing a train reaction, police said. The S-10 was pushed in to the back of Honda Civic causing the Honda to slam into the rear of a second tractor. The Honda driven by Erin Murphy, 23, was lodged under the trailer.

The truck continued south until it hit the rear of a Freightliner double-trailer. The truck then came to rest between the first tractor and Freightliner.

ISP said Young was trapped in the trailer for sometime before he was extracted by Columbus Fire Department crews. He was flown to IU Health Methodist Hospital in serious condition.

Blum and his passenger, Linda Blum were taken by ambulance to Columbus Regional Hospital. Both were treated for head lacerations. Murphy was taken to Schneck Medical Center in Seymour by a guardian. He was treated for facial lacerations.

Azrikam Yisrael 64, the driver of the second tractor was transported to Columbus Regional Hospital for head pain. The driver of the Freightliner did not report any injuries.

ISP said the southbound lanes of I-65 closed for around three hours to clear the crash. A roving construction crew was making repairs to the road around 2:30 a.m.