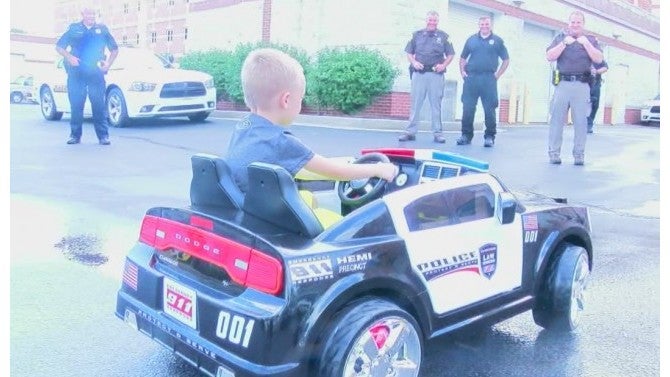 COLUMBUS, Ind. (WISH) — A kindergartner from Taylorsville is all smiles tonight thanks to the help of some central Indiana law enforcement.

A few weeks ago, News 8 shared a story about Conner Burton, a 5-year-old aspiring police officer who had his miniature cop car stolen.

After Conner Burton’s family reported his toy police car stolen, the men and women in blue knew something had to be done. On Tuesday, they made a memory that will last a lifetime.

The miniature car was all Conner wanted for his birthday last year because he said he one day hopes to be a police officer to help people.

In August, Conner drove his car to the local gas station and his mom walked alongside. They went inside to get Conner candy because he was well-behaved. In three minutes, his toy vanished.

“When somebody steals your cop car, that’s called rude,” Conner told News 8 a few weeks ago.

“I cried until I fell asleep,” he said thinking about that night.

As police started investigating they knew something had to be done.

“Anytime someone is a victim like this in any case you want to help those victims out,” said Chief Deputy Chris Lane from the Bartholomew County Sheriff’s Office, which is leading the case.

Weeks of planning by the sheriff’s office along with police from Stinesville and Edinburgh led to Tuesday. They surprised Conner with a brand new toy cop car.

The officers said it was donated to them.

Conner and his family went to the sheriff’s office after being told police wanted to ask Conner some questions about the case. He had no idea what was waiting for him.

“It makes you happy? How happy?” Conner’s mom asked him.

A small gesture that created a special moment.

While police said they were happy to put a smile on Conner’s face, they also said the investigation is ongoing to figure out who stole his original toy car. If you have any information, call (812) 376-2600.