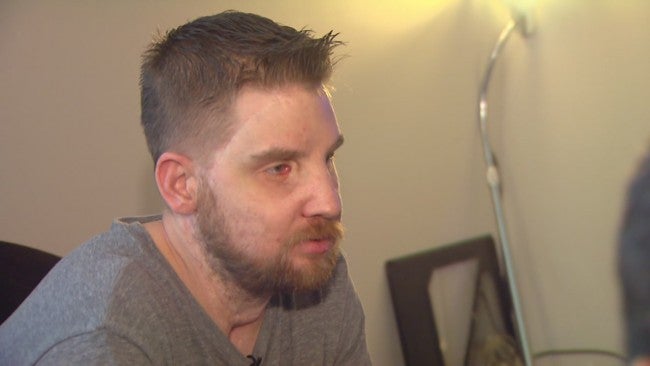 INDIANAPOLIS (WISH) — After nearly five years of silence, an Indiana man who was one of the first in the world to receive a face transplant is speaking to 24-Hour News 8.

The transplant happened in 2011, and Mitchell Hunter said in an exclusive interview Sunday that he feels fantastic. “I feel just as healthy just as I did when I was 21, and I feel great,” Hunter said.

At 35, he’s got a full-time job, and he’s able to take his son to the movies —  all things he wouldn’t have thought possible after a tragic 2001 night in North Carolina.

“People tell me that I’m fortunate that I don’t remember [the accident] because it would probably a lot of pain,” Hunter said.

The car he was in slammed into an electrical pole. Hunter, a former soldier, pushed a woman to safety, but he wasn’t as lucky.

He took a zap of 10,000 volts for nearly five minutes. The shock took his leg and face.

To some, it might be the end, but to Hunter it was only the beginning. “I look back on it as something that made me stronger,” he said. “I mean, yeah, I’d like to have my leg and my face back, but without that happening I wouldn’t be who I am today.”

He had facial work, but it made life difficult. “Imagine walking into a room and like falling, and everybody noticing. That’s how it was every time I walked in a room because of the way my face looked.”

It all changed in 2011. Hunter became one of the first people in the world to be given a new face by a donor.

It’s a gift that has forever altered the Indy native’s life. “It’s a lot easier to go out in public, I will tell you that,” Hunter said.

Gone are the stares and the names. Instead he’s faced with new challenges, like how long his facial hair should be. “When I touch the beard I can also feel the sensation under the skin,” Hunter said.

And the sensation isn’t only under the beard. “Yeah, hot, cold, pain, tickle, rubbing my beard, someone kissing my face — I can feel everything.”

Those are feelings he’d much rather have than the depression he felt after the accident. “I think it’s an amazing journey. I mean, it’s been a hard journey,” he said.

After years of silence, he hopes others don’t keep quiet, especially since he knows how quickly life can change.

“I would like to tell people just not to worry about the small things; live life,” Hunter said. “Tell the people you love that you love them because you never know when that can be taken away.”

Hunter’s medical treatments aren’t over. He still has to travel to Massachusetts twice a year to get work done.

He was scheduled to go in May, but being a big motor sports fan, he told doctors it’ll have to wait because he’s not missing the 100th running of the Indy 500.