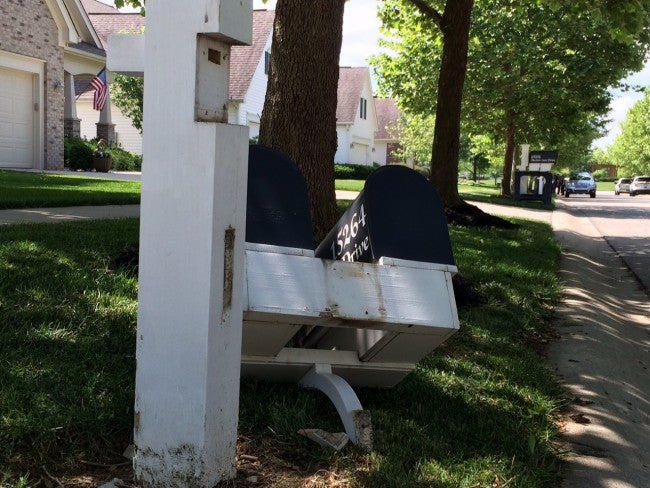 WESTFIELD, Ind. (WISH) — Police in Westfield are searching for whoever damaged 50 mailboxes.

The calls came in overnight from residents in the Centennial subdivision.

Most of the damage is on Declaration Drive, where neighbors were out all day Tuesday fixing what vandals caused.

The homeowners association says the damage could top $20,000.

“Well, this isn’t making my day easy,” said an unidentified mailman as he placed mail in a mailbox on the ground.

Most of the mailboxes were turned over and some were beaten. All of them were the talk of the neighborhood.

“I think it was some teenagers that just got out of school for the summer and they’re just having fun,” said Jack O’Donnell, whose mailbox was vandalized. “What they call fun, I call vandalism.”

“It’s just so senseless. If you’re a kid who wants a thrill, go ride a roller coaster,” said Joe Plankis, the president of the homeowners association.

“I was amazed as I drove my son to school. We drove through the neighborhood and its just sad that there’s so much damage,” said Molly Klen, one of the first people to call 911. “Around 4 o’clock, I just heard commotion outside something banging and sounded like things falling. Came downstairs and looked out the window and noticed our mailbox along with some of the neighbors was on the ground.

Westfield police were on the street this afternoon assessing the damage. While still following and developing leads, neighbors are being told it’s unlikely the vandals will be caught.

Anyone with any information is asked to contact the Westfield Police Department at 317-773-1282 or Crime Stoppers at 262-TIPS.