6 dogs at center of Westfield battle 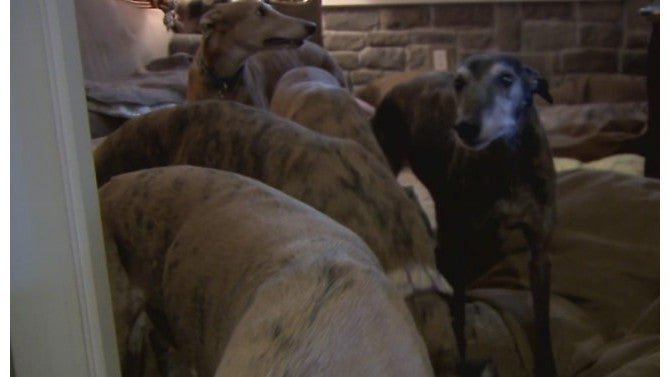 WESTFIELD, Ind. (WISH) — A battle is brewing in Westfield about whether one homeowner can keep all of her pets, even though the total is double what is allowed by city law.

The Zoning Board of Appeals on Tuesday night did not decide what should be done; instead, it called for a continuance until October.

The decision came after nearly an hour of testimony and questions. Several people spoke on Julie Robertson’s behalf. A handful of neighbors complained about the issues they have with Robertson’s pets.

Robertson has six greyhounds in her home that she’s owned for about a decade. But, city law and her homeowner association’s rules call for three pets at maximum in a home.

It doesn’t take long to see how Robertson feels about her dogs.

“They steal your soul and never give it back,” she said.

Many of her greyhounds were racing dogs from litters to a dog she once owned. For years, Robertson worked to bring them home.

“I absolutely positively believe I saved every one of their lives,” she said, noting that one was set to be euthanized and another gravely malnourished.

“Sometimes you have to do things and it doesn’t fit neatly into everybody else’s categories,” she said, acknowledging she broke city law knowingly.

“These aren’t the concrete patios and colors you pick for your house. These are living beings.”

She and her lawyer took their case to the board Tuesday. They asked to keep the dogs in her home for two years. She said, by then, she could build another home outside of Westfield.

But, not everyone agreed with the proposal. Some opponents said she should immediately have to comply with the city and homeowner rules if she wants to live where she does. Others said she should have to move in six months.

One neighbor, Deanna Pruitt, said she cannot go outside in her backyard for extended periods of time because of the smell from pet waste, saying the issue is “not about emotions. This is about facts.”

“This is an ongoing problem,” she added. “It stinks to high heavens.”

Robertson said that problem has been fixed, which Pruitt denied.

Other opponents said they feared what precedent could be set by giving Robertson flexibility, wondering what dog owners could be looking for exceptions for their pets.

Robertson had several people speak on her behalf, including two veterinarians. One said if he were a pet, he would want to be in her care because she is so caring.

The next time this matter will be discussed is in 30 days.