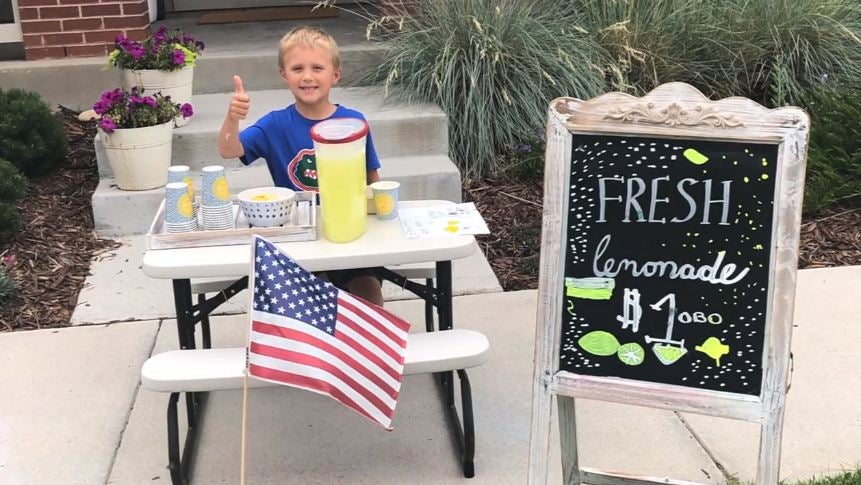 (CNN) — When life hands you lemons, do what a 6-year-old Denver boy did — open a lemonade stand.

Lots of kids have lemonade stands this time of year but Brady Campbell’s may just be the sweetest. Brady’s father, Brandon, passed away a few weeks ago after a battle with Stage 4 colon cancer.

Brady says he and his dad came up with the idea for a lemonade stand.

“To take my mom on a date,” Brady said. “Because I didn’t have enough money and I wanted to pay. So I did it.”

The day after his father passed away this 6-year-old followed through on his promise to take care of his mom.

“Brady is a very sweet soul,” said Amanda Campbell, his mother. “He’s always looking out for everybody else and I think he really learned that from his dad.”

His neighbors and friends that came by in the crowd caught the attention of a Denver police officer. Once he heard Brady’s story, he put out a radio call to other first responders.

“It really lifted our spirits and it made Brady so happy,” Amanda said.

And now a neighbor has set up a “GoFundMe” virtual lemonade stand to raise even more money for Brady, his mom and for cancer research.

This they say is the ultimate “life gives you lemons” story. And Brady is making the most of it.

“It’s pretty special and I know Brandon would be very, very proud.”