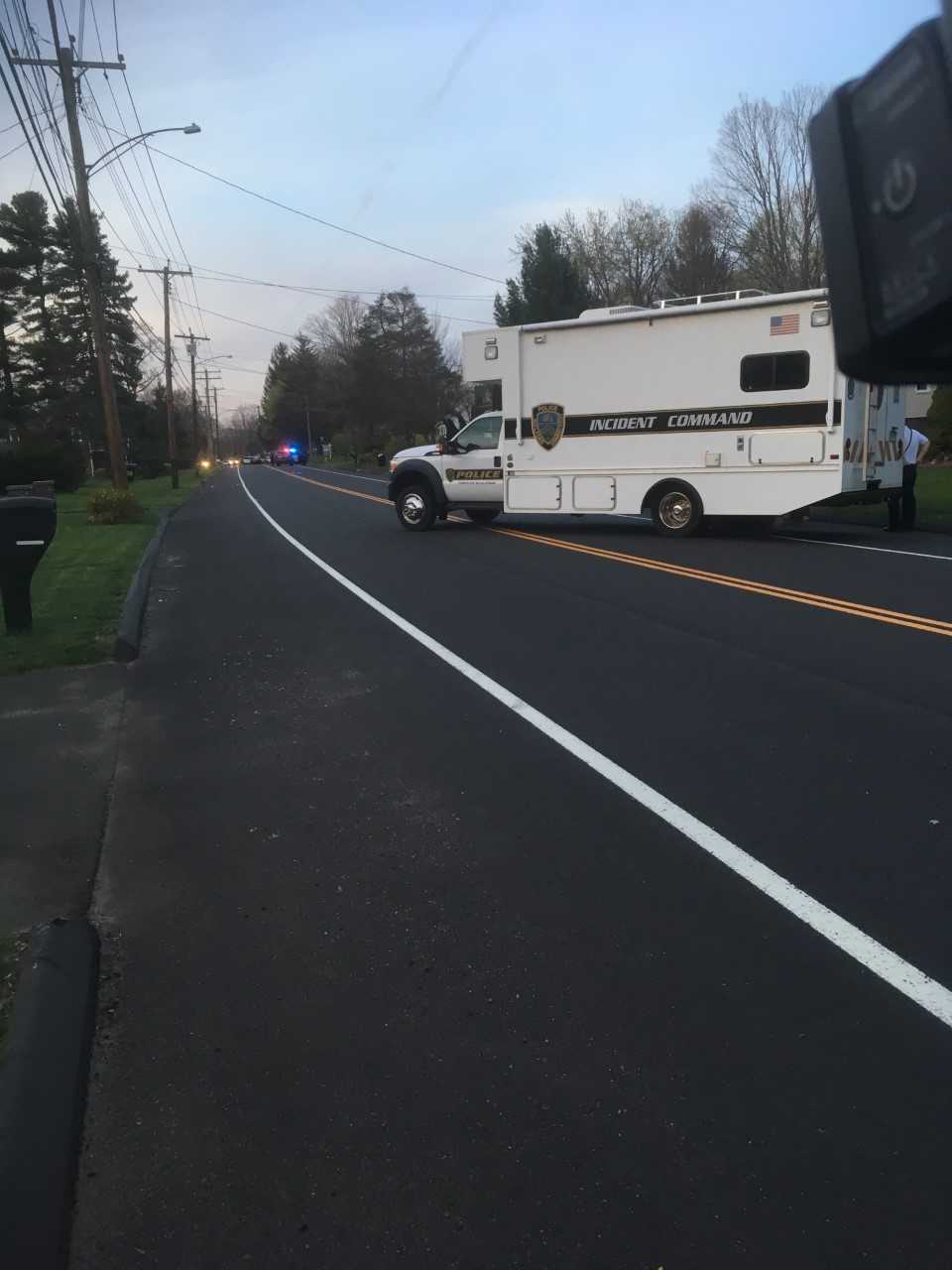 NORTH HAVEN, Conn. (WTNH) — Nine officers were injured and human remains were found on the property of a North Haven home after a police standoff resulted in an explosion on Quinnipiac Avenue.

North Haven First Selectman Michael J. Freda said in a press conference Wednesday that it started with a wife was being barricaded in the home for three days.

The woman was able to escape the home, Freda said. Police were then called to the home where the husband had barricaded himself. He has not been taken into police custody.

Several SWAT members had gotten close to the residence and were ready to go in before a barn at the home at 385 Quinnipiac Avenue exploded.

The explosion happened around 8:15 p.m., according to witnesses.

Police say nine members of a regional SWAT Team that included five East Haven officers, three North Haven officers and one Branford officer were injured in the explosion.  All their injuries were consistent with the blast.

Yale New Haven Hospital says that they received all nine patients and that they are all in fair condition.

East Haven’s mayor said that of the East Haven Police Department members injured, two have been released from the hospital and two more have broken legs.

Police say that the fire has been extinguished and that they did find human remains of a person in one of the structures. The remains have not been identified at this time so it’s unknown if it is the suspect.

Fire crews will remain on scene as there are a number of structures in the back of the home that they are still working to extinguish. They are also investigating the cause and origin of the fire.

Police added that while this stemmed from a domestic incident, the woman was not home at the time of the explosion and that this was not a hostage incident.

At least 100 first responders were on the scene following the explosion. More than 30 New Haven SWAT and Bomb Squad officers were assisting in the standoff.

The FBI and the State Police Major Crime Squad also responded to the scene with mutual aid.

A News 8 crew reported that police officers used a loudspeaker to ask a man to come out of the house.

A witness told News 8 that they heard gun shots coming from the house.

“We had just gotten done eating dinner, we got up, we heard the explosion, it knocked my wife to the floor,” said one neighbor. “I huddled my family into the bedroom, locked the door, and came out to see what was going on. You could see the house was fully engulfed, you could hear the rounds popping off, I guess he had ammunition in there.”

A neighbor said police officers told neighbors to get in their houses, as more explosions might happen.

“You could hear them every couple of minutes or so over the loudspeaker, just saying, ‘John, please come to the window, please show yourself, we are here to help.’ You could tell they were doing everything they could to have a peaceful solution to this.”

“Right around 8:15, 8:30, a flash went off. The explosion went right through the windows, and hit my roof, and my whole house shook,” said one neighbor. “We were freaking out. I thought my life was going to end.”

HAPPENING NOW: State police are giving an update on the standoff and explosion at a North Haven homePosted by WTNH News 8 on Wednesday, May 2, 2018

Authorities have closed Quinnipiac Avenue between McArthur Road and Pentway Lane until further notice. They say drivers can expect to not be able to go through all day.

Also, police say residents will not be able to access side streets in the area either.

However, there are detours in the area.  School buses are aware of these detours.

From @WTNH viewer, @feliciamapuzzo “If you’re coming from East Haven like me you can use Charnes Drive to Cloudland Drive to Middletown Ave quickly to Spring Road then I use Tenniyson to Pool Rd then any side road to Washington Ave ” https://t.co/enuGdKKrbf— Alyssa Rae Taglia (@AlyssaRaeTaglia) May 3, 2018

“Our hearts go out to the brave first responders who put their lives on the line, and we wish those injured a safe and speedy recovery. Yesterday’s tragedy serves as a stark reminder that domestic violence is a serious issue that must continue to be addressed and remain at the forefront of the national conversation.  If you or someone you know is the victim of domestic violence, please know that you have a voice and there are resources available to help.”

No further details are available at this time.