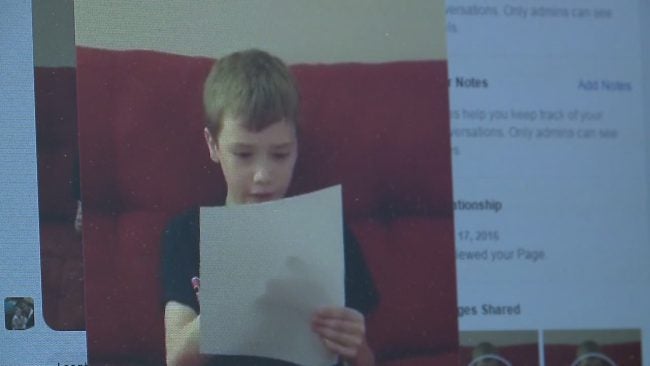 FISHERS, Ind. (WISH) – If you need reasons to like the police, nine-year-old Brogan Coffman has a bag full of them. The Fishers Police Department gave him bag of goodies Monday afternoon. But there’s something else about the men and women who wear the badge that has him smiling.

“I like them they because they help us protect the city,” he said.

Last week Brogan was supposed to stay after school at New Britton Elementary since his mom was going to be working, but he forgot and hopped on the bus home.

“I tried to knock on the door and it was locked,” he said.

Not only was his mom not around, his neighbors they trust when a problem arises were gone as well.

Luckily, Officer Brian Alvey happened to be patrolling in the area and spotted Brogan crying and walking on the sidewalk.

Officer Alvey called Brogan’s school in order to get in contact with Brogan’s mom. He eventually did and kept the boy company until she could rush home.

The story could have ended there but that wasn’t good enough for the thankful third grader.

He wrote a letter showing his appreciation. His mom shot a video of him reading it and sent the video to the police department. In the video Brogan says:

I want to make this video to thank police officer Alvey from Fishers Police Department. I forgot to stay at school. I rode the bus home by mistake and he helped me when I was left outside. He called my mom at work and stayed with me until somebody came home. I was really scared and he helped me feel safe and made my mom stop worrying and crying. Officer Alvey you’re my hero. Sincerely Brogan Coffman, third grader at New Britton Elementary School.

“The video was just the icing on the cake,” said Sgt. Tom Weger. He had no idea about Officer Alvey’s good deed until he got the video.

“I think this is just a perfect example of why we put this uniform on every day. We want to improve the life of someone else and on this particular day Officer Alvey had the opportunity to positively impact this family by helping this child that was in need.”

But Sgt. Weger said what’s more impressive is that Brogan made sure the whole department knew about it.

“Obviously (Brogan) is a fine young man and with lots of great character and he wanted to take the time to say thank you,” he said.

In Brogan’s gift bag was a replica police badge. After Sgt. Weger pinned it on him, Brogan said it made him happy because it reminded him of his grandfather who is a retired police officer.