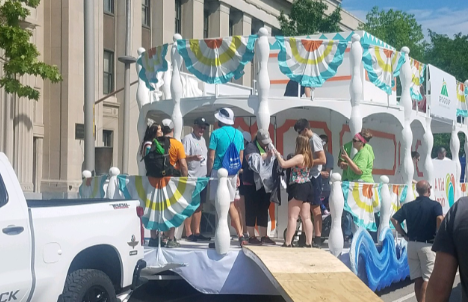 INDIANAPOLIS (WISH) — “A Kid Again” is making its debut in Indianapolis as one of the floats featured in the 500 Festival Parade.

The organization, which started in Columbus, Ohio, is dedicated to helping families who have kids battling rare life-threatening illnesses.

The organization organizes trips and events for the kids and their families to participate in to get away from the everyday troubles that struggling with these illnesses can bring.

“A Kid Again” President, Oyauma Garrison, says moving the organization to Indiana is just another step in a long road to helping kids all over the country.

“1.5 million kids across America are facing some level of a life-threatening illness or condition,” Garrison said.

Carrie Kirk’s 12-year-old son Cameron is one of those kids. She says being a part of “A Kid Again” is just what her family was in desperate need.

“It’s meant everything to us,” Carrie said.

During the organization’s first year, the Kirk family has played a major role in getting the word out to families affected just like their own.

Now the Kirks and other families will get a chance to put the organization on display and have fun on what’s expected to be the largest float in the 500 Festival Parade.

News 8 asked Carrie to describe what it’s going to feel like for her family to experience riding on the float in the middle of the parade.

She and her kids agreed on one word.

For more on the Indiana chapter of “A Kid Again” click here.