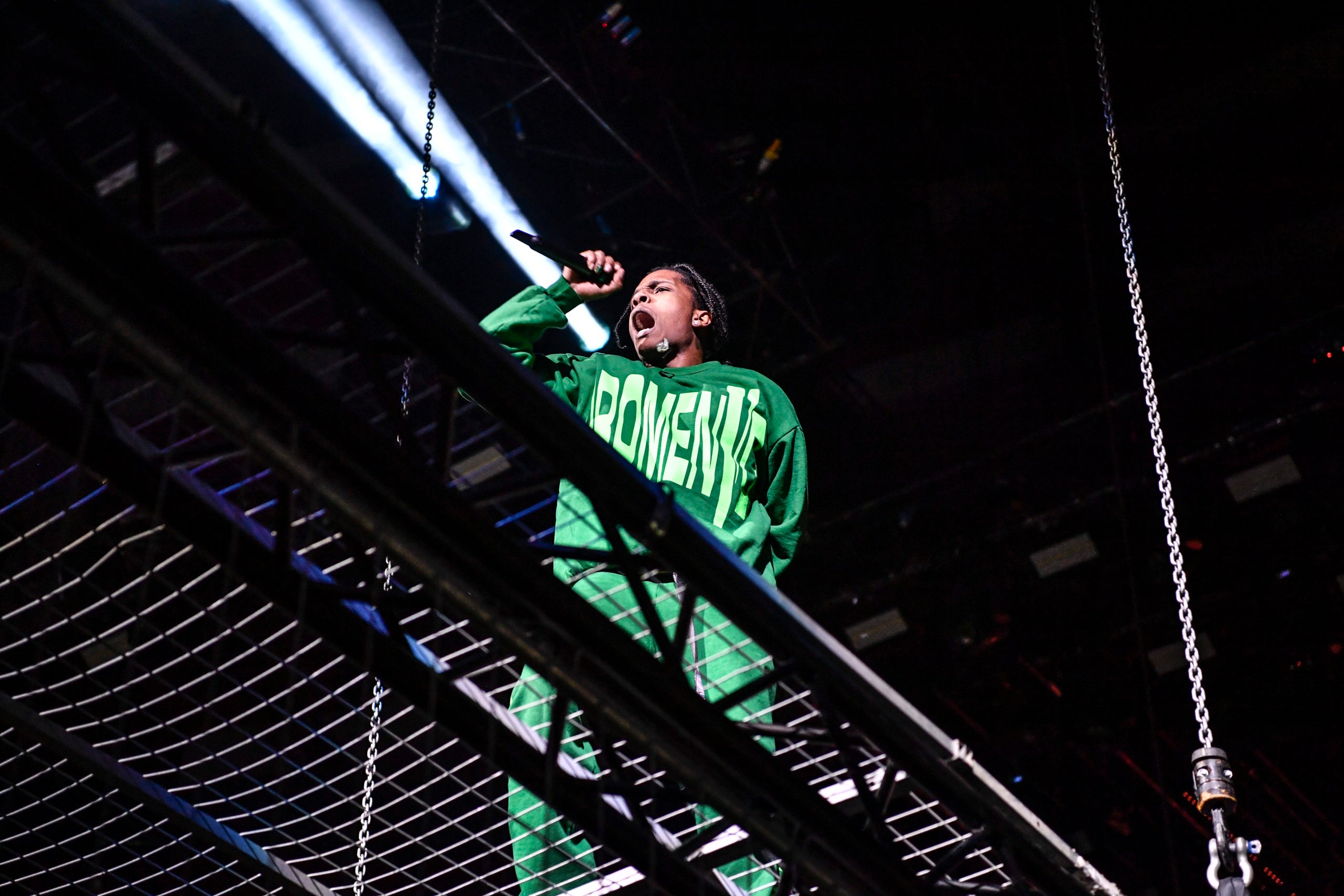 STOCKHOLM (AP) — A$AP Rocky is back in Sweden. The American rapper performed Wednesday evening, four months after he was convicted of assault for a violent street brawl.

The curtain raised at Stockholm’s Ericsson Globe arena to the sight of a stage-wide metal cage enclosing male dancers. They attempted to break free as soon as the rapper began to perform, a not-so-subtle reference to his nearly month-long incarceration this summer pending his trial.

But A$AP Rocky, whose real name is Rakim Mayers, said he wasn’t there to talk about his treatment in the hands of the Swedish authorities but to “spread love and have fun.”

However, the show was peppered with references to his time in a Swedish prison, including a simulated arrest and joking he felt like “an honoree Swede as this point.”

Following a visit to a school in the suburbs of the Swedish capital earlier in the day, Mayers posted an open invitation to his concert on Instagram.

“Whoever’s from the hood, they get in for free,” he said in a video that went viral on social media and led to lines of youngsters making their way into the capital.

High school student Farnaz Roustaei was in bed when she heard the news on snapchat and succeeded in convincing her mother to let her travel ninety minutes into town. She got her ticket via a link on Mayers’ Instagram profile, and while not free, it cost her only 11 krona (1.1 US dollars.)

“I’m so stressed. It’s my first concert ever,” she said, sharply dressed and with fresh make-up, making her way to join her friends.

Mayers was arrested along with his two bodyguards and charged with assault after a 19-year-old man was hurt in the June 30 fight. He pleaded self-defense, saying he tried to avoid a confrontation with two men who were following his entourage.

Mayers and his bodyguards were all convicted but received conditional sentences, sparing them prison time unless they committed similar offenses in the future.

The issue also led to a U.S.-Swedish diplomatic spat.

U.S. President Trump intervened on behalf of the rapper while he was jailed and called Swedish Prime Minister Stefan Lofven on July 20, offering to personally guarantee his bail, but the Swedish leader said he couldn’t interfere in a legal case.

Despite Trump’s intervention, Mayers was not immediately released. Trump also sent Ambassador Robert O. Brien, the U.S. special presidential envoy for hostage affairs, to Sweden to monitor the court proceedings. Trump later cheered the release of Mayers and his bodyguards.

During his return to Stockholm this week, A$AP Rocky had wanted to entertain inmates at Kronoberg prison, the facility where he was held for weeks this summer.

But Sweden’s prison board nixed the prison concert, citing logistical and security issues.