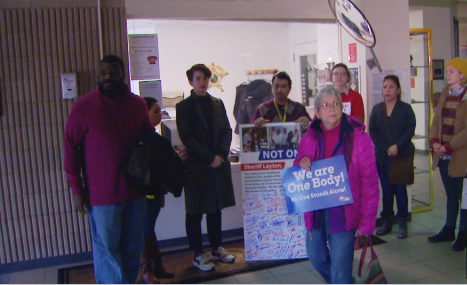 INDIANAPOLIS (WISH) – Immigration advocates are pushing for Indianapolis to become a “sanctuary city.”

These advocates say families are being torn apart because of deportations under the Trump administration. That’s why they came to the sheriff’s office looking for answers.

About 20 people went to the Marion County Sheriff’s Office looking to speak with him.

They say they don’t want local resources to be used to deport people.

This is after President Trump’s immigration executive orders and ramped up deportations.

Sheriff John Layton originally said that he wouldn’t meet with this group but eventually met with them.

“I  am standing with immigrants, Muslims. These are people who are at risk of either being deported or not allowing into this country,” said Joanne Lingle, who went to meet with the sheriff.

“Bullying never gets anybody anywhere,” said Sheriff Layton after the group stormed into the building. “Shortcutting doesn’t get laws made. And what I’m trying to tell you is you’re at the Marion County Sheriff’s Office. I don’t make laws, I enforce laws. You need to go where they make laws.”

The sheriff also met with the group in a closed-door meeting.

As for the administration, Trump tweeted: The crackdown on illegal criminals is merely the keeping of my campaign promise. Gang members, drug dealers & others are being removed!

After the meeting they were planning their next steps. It seems like they will next be going to the statehouse demanding a change of state law.