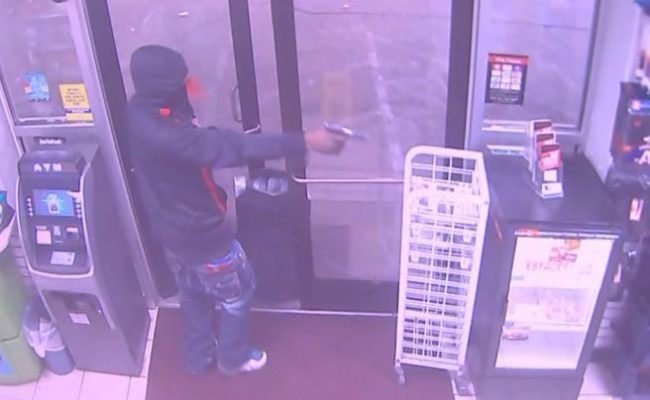 A clerk became concerned, locked the doors, and called 911. About 45 minutes later, the masked men returned and they came inside after a customer opened the door.

Once inside, the suspects demanded cash. A bulletproof glass enclosure protected the clerk from the suspects.

Suddenly, one of the suspects started firing shots at a door leading to the cashier area. While shots were being fired, the clerk started slipping money through the glass enclosure.

The men rushed out of the store but as they tried to escape, an officer dispatched to the scene came face-to-face with the suspect.

The Indianapolis Metropolitan Police Department says the suspect confronted the officer and the officer fired a shot.

No one was injured. Police searched for hours for the suspects but were not able to locate them.

24-Hour News 8 is learning that the gas station owner is contemplating shutting the gas station down. In the past year, station management estimated gunmen have targeted the store thirteen times.

IMPD plans on increasing its visibility in the area over the next couple of days.