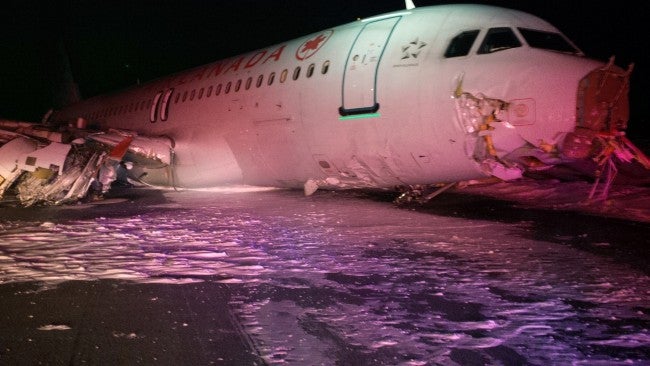 HALIFAX, Nova Scotia (AP) – Air Canada say 18 of the 23 people injured when one of its jets skidded off a runway last night have been released from hospital, and none of the injuries are considered life-threatening.

The Airbus 320 carrying 133 passengers and five crew members from Toronto made a hard landing in bad weather in Halifax, Nova Scotia. Canada’s Transportation Safety Board is calling it an accident and has provided pictures that show the plane’s nose torn off and what appears to be an engine crumpled under a damaged wing.

Passengers say the aircraft may have hit a power line as it came in to land and described the plane skidding on its belly for some time before it came to a stop. Power went off at the airport, but officials haven’t confirmed the cause.

The Halifax region was under a snowfall warning at the time, with an Environment Canada alert saying, “Visibility may be suddenly reduced at times in heavy snow.”