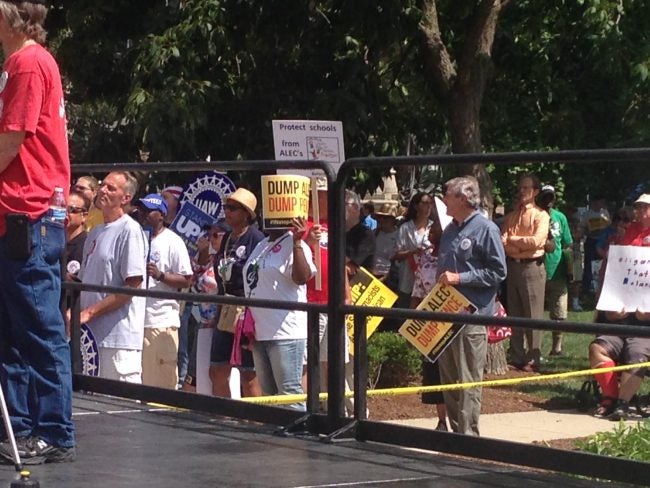 INDIANAPOLIS (WISH) — Four state lawmakers want Indiana taxpayers to pay for their trip to a private function, I-Team 8 has learned.

The lawmakers were among hundreds of legislators, lobbyists and corporate members attending last month’s annual conference of the American Legislative Exchange Council.

That revelation uncovered by I-Team 8 – that public money might be involved to reimburse those attending a private function – raises new questions about the conference and the influence it has on Indiana’s legislators.

“I was for ALEC before it was cool,” Pence told the crowd gathered for a luncheon.

Rep. Tim Wesco, Rep. David Heaton, Rep. Ron Bacon, and state Sen. Jim Buck are the four lawmakers seeking mileage reimbursements for travelling to the conference, according to the information provided through the Legislative Services Agency.

In a recent interview, Sen. Buck said that the conference is about “pure education” and is a “time saver for lawmakers” who are looking for ways to help their states. Other supporters of the non-profit charity say it’s a great place to exchange ideas on the principles of federalism and limited government.

Other Indiana lawmakers attending the event said it was good experience.

“I think about one out of four state legislators are members of ALEC. This is a place where you can exchange ideas of what they are doing in different states and how they are approaching things. And I think it’s a good exchange of ideas,” state Sen. Dennis Kruse said.

But critics charge that ALEC is more about buying influence by allowing corporations and their lobbyists exclusive access to lawmakers where they then can together on so-called “model legislation” behind closed doors.

Reporters were invited to attend the conference but were barred from covering so-called “task force meetings” where votes on the model legislation took place.

When we asked ALEC spokesman Bill Meierling why those meetings were kept private, he said “The reality is that people want to have free, open debate and discussion and sometimes they require privacy.”

When pressed by I-Team 8 if public laws were created behind closed doors, Meierling said, “They are not laws – they are discussions of model policies.”

An I-Team 8 investigation found that those model policies are often carbon-copied into Indiana’s Statehouse. For example, I-Team 8 discovered a resolution pushing for local control of coal emissions was copied word for word from an ALEC resolution. An ALEC-backed policy that called for the repeal of a common construction wage became part of Indiana law last year.

During our time covering the three-day conference, I-Team 8 was told it would not be permitted to cover any task force meeting where votes on model legislation occurred. One of those meetings, a tax policy gathering, was led by a New Hampshire lawmaker whose nameplate was next to a lobbyist for the alcohol and tobacco industry. Two nights earlier, an I-Team 8 reporter noticed several ALEC attendees had returned to the hotel bar from a private cigar party.

I-Team 8 pressed Indiana lawmakers on the after-hours get-togethers and whether they bore any influence on how they voted.

“We just have get togethers,” Rep. Heath VanNatter said.

When asked if it greased the wheels to vote a certain way, he said, “No. I do what’s best for my constituents.”

Julia Vaughn says what goes on at ALEC should be transparent.

ALEC is considered by the IRS to be a non-profit charity, meaning its donations are private and tax deductible.

Sen. Buck said that private donations are necessary for ALEC to raise money for its scholarship funds that help offset the costs of lawmakers attending the conferences. When asked about the criticisms lobbed at the group for not being transparent enough, Buck told us, “To try to say that this is all secret is misleading to say the least.”

When asked about the private scholarship funds, Buck said he had received scholarship money in the past but could not immediately recall how much.

ALEC has had to shoulder the burden in recent years of losing corporate sponsors like Google, Coca-Cola and most recently AARP. The senior-associated group announced on its Facebook page last week that it was cutting ties with ALEC.

This statement was posted to AARP’s Facebook page Friday morning:

After hearing from many of you, we’ve decided not to renew our membership to ALEC. We would never work against the interests of older Americans and our engagement with ALEC was NOT an endorsement of the organization’s policies, but an opportunity to engage with state legislators and advance our members’ priorities.

AARP is and always has been non-partisan. We meet with legislators from both sides of the aisle in order to do our job: fighting to improve the lives of people 50+. We will continue to explore ways to serve our diverse membership and fulfill our responsibility to engage with all legislators on the issues important to older Americans and their families.”