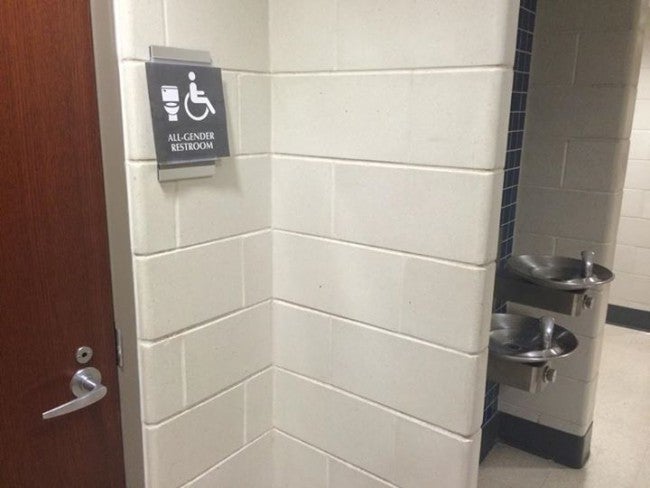 The dean of the arts college started the movement to get the bathrooms.

He said it’s an important step to making everyone feel comfortable.

“You see a lot of men’s rooms and women’s rooms only and quite frankly, I don’t fall into either of those categories,” York, the Butler senior, said.

“I’m ‘agender’ which means I’m not male or female, I fall into the non-binary spectrum of transgender,” York said.

Right now there are two buildings on campus with specific all-gender restrooms, Lilly Hall and the Health and Recreation Complex.

Cambria is grateful the university has begun designating restrooms in this way.

“It’s very refreshing to interact in an environment where it’s a bit more accepting,” York said.

Student Ariel Laukins also identifies as ‘agender’ and said there wasn’t a great option before these were put in place.

“I’d go to the women’s restroom and I still do in a lot of the buildings that don’t have them because I was designated female at birth,” the Butler Sophomore said.

They’re both thankful for a decision made by the dean of the arts college, Ron Caltabiano.

“We just simply changed the signs,” he said.

He got the idea from a “safe space” training seminar last year.

“I thought that it made sense to me that I’d like to have everyone be comfortable here at Butler and this is a terrific way to do that,” Caltabiano said.

He also said because the building is open to the public, many people in different situations will be able to benefit.

“I think about perhaps when I had to help my elderly mother use the restroom and you know, going into a men’s room or women’s room in that situation is very difficult,” he said.

There will be several of the all-gender bathrooms in the Lilly Hall building.

The dean said he hopes there could be more placed in different buildings across campus as well but right now there aren’t plans for more.

They’re also keeping some men’s and women’s rooms as they are right now.

Inside INdiana Business / 37 seconds ago