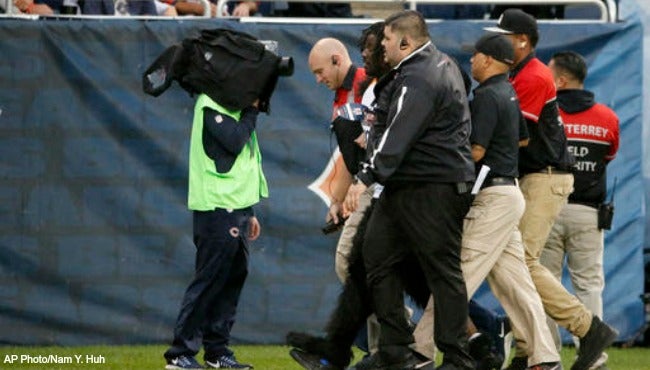 CHICAGO (AP) – A person dressed in a gorilla suit and a T-shirt that read “All Lives Matter” ran on the field during the fourth quarter of Sunday’s Lions-Bears game at Soldier Field.

The person was tackled by security near the 40-yard line on the south side of the field near the Detroit bench. The fan was then escorted from the playing surface.

A spokesman for the Chicago Police Department said he hadn’t heard about the incident. A message was left by The Associated Press seeking comment from the Bears.

The front of the person’s T-shirt read “All Lives Matter” in black lettering and the back said “Drop The Guns.”

The incident comes with several players in the league facing criticism for various displays during the national anthem. Some players who have protested have said they have concerns about treatment by police of African-Americans, a focal point for the “Black Lives Matter” movement.

There didn’t appear to be any protests by the Lions or Bears before Sunday’s game.