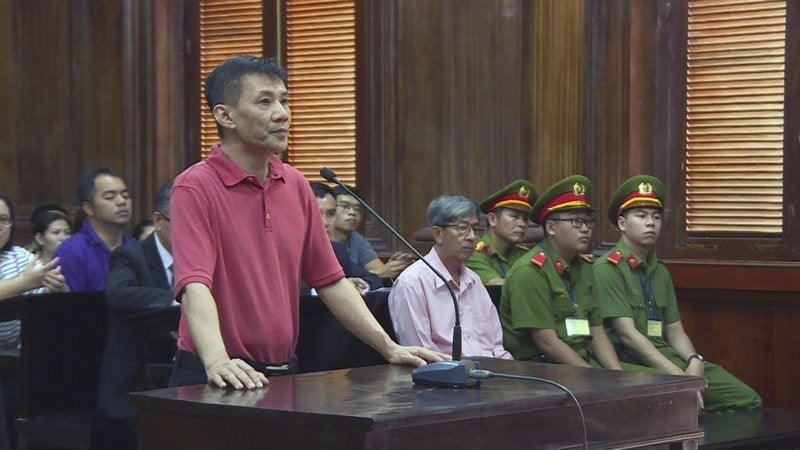 HANOI, Vietnam (AP) — A Vietnamese court has sentenced an American to 12 years in jail for what was described as an attempt to overthrow the Communist nation’s government.

The state-owned Tuoi Tre newspaper reported Tuesday that 55-year-old Michael Nguyen was also convicted of inciting people to participate in protests with the intent to attack government offices in the capital, Hanoi, and in southern Ho Chi Minh City.

Two Vietnamese men, Huynh Duc Thanh Binh, 23, and Tran Long Phi, 21, were sentenced to 10 and 8 years in prison respectively on the same charges after a half-day trial Monday in Ho Chi Minh City.

They were arrested last July in Ho Chi Minh City after returning from Hue in central Vietnam, where they had traveled to recruit more anti-government protesters, according to the state media report.

The protests Nguyen is accused of planning did not occur.

Nguyen is from Orange County, California, and his wife was a guest of Rep. Katie Porter at President Donald Trump’s State of the Union address earlier this year.

“I’m disappointed with this outcome, and my heart aches for the Nguyen family and for our Orange County community,” Porter told the Orange County Register newspaper in an email.

Nguyen’s wife, Helen Nguyen, was quoted by the newspaper as saying the sentence was “a slap to the United States.”

She said their youngest child, one of their four children, cried out “why, why, why” when she heard the news.

The U.S. Embassy in Hanoi said in a statement Tuesday that it was disappointed by the verdict and will “continue to raise our concerns regarding Mr. Nguyen’s case, and his welfare, at all appropriate levels.”

Protests are rare in Vietnam, where the Communist authorities do not tolerate criticism of the government. More than a dozen people were tried last year on charges of conducting anti-government propaganda.

Human Rights Watch ranks Vietnam among countries with the least freedom of expression.