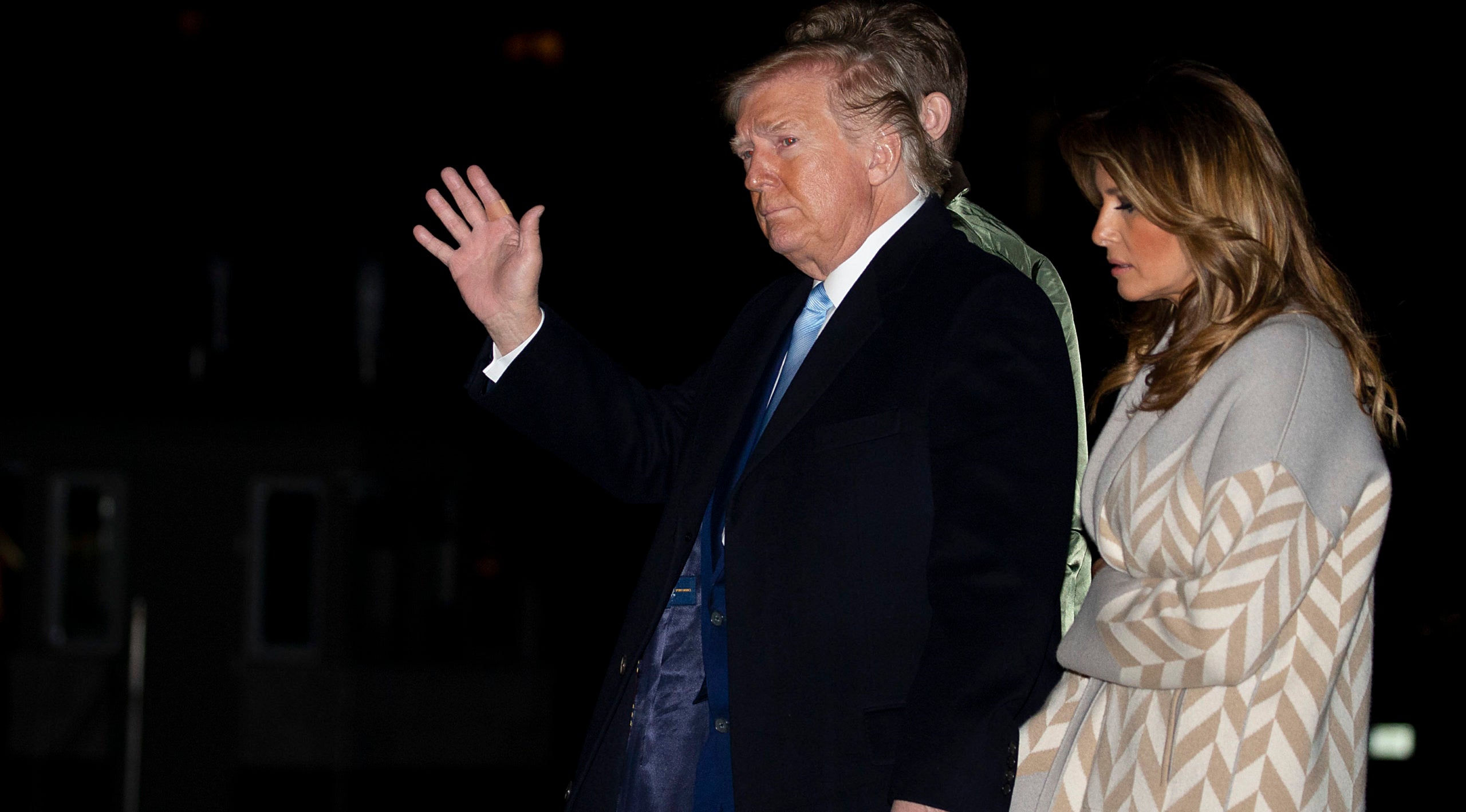 (CNN) — The Trump administration is already in danger of losing control of the swift chain reaction and political storm unleashed by its killing of Iran’s top general, Qasem Soleimani.

President Donald Trump’s claim that the drone strike last week made Americans safer is being challenged by cascading events that appear to leave the US more vulnerable and isolated.

The administration’s basis for the attack also came under renewed suspicion after Secretary of State Mike Pompeo told CNN that it was not “relevant” for him to reveal how imminent the attacks on US interests were that Trump said Soleimani was planning.

In proliferating signs of the deepening crisis, Iran on Sunday announced that it was shaking off restrictions on its uranium enrichment under the Obama-era nuclear deal. Iraq’s parliament voted to expel US troops. A US exit could imperil its fight against extremism and consolidate Iranian influence in Baghdad. Dissent emerged inside the administration over the President’s vow to strike cultural sites — or civilian targets — if Iran mounts reprisal strikes. Administration claims that the elimination of Soleimani, Iran’s Middle East terror chief, sparked celebration in Iran were confounded by Tehran’s orchestrating of Soleimani’s funeral rites to launch a propaganda campaign to heal national divides.

Washington’s European allies, meanwhile, distanced themselves from Trump’s assault. The US-led ISIS coalition temporarily stopped action against the terror group to protect Iraqi bases from Iranian-backed militias. And in a new sign of widening gaps between Iraq and the US, Prime Minister Adil Abdul Mahdi said he had been scheduled to meet Soleimani on the day he was killed to discuss an initiative to ease Iran-Saudi tensions.

In Kenya, three Americans were killed in an attack on a military base by Al-Shabaab, a jihadist group. The group follows a Sunni strand of Islam while Iran has a Shiite Muslim majority and there was no immediate link to the killing of Soleimani. But the attack was a reminder of both the vulnerability of US personnel to terror attacks and a sign that other US adversaries might try to take advantage of the tumult for their own ends.

The growing international tumult was matched by a worsening confrontation at home with Capitol Hill Democrats and Republicans becoming even more estranged over the President’s impeachment trial, a drama that was triggered by Trump’s handling of another foreign policy issue — Ukraine — and his efforts to use his power to coerce political dirt on his domestic opponents.

The deepening fallout over Iran renewed a focus on Trump’s leadership style and the question of how carefully he had considered the consequences of the attack.

The administration is resisting giving a public accounting of the intelligence that led it to attack Soleimani. Democrats in Congress, who have said they were not consulted in advance and that the White House has only offered a classified explanation of its action, called on Trump to declassify the formal notification given to Congress about the attack.

“It is critical that national security matters of such import be shared with the American people in a timely manner,” says the letter, issued by Senate Minority Leader Chuck Schumer and Sen. Bob Menendez, the top Democrat on the Senate Foreign Relations Committee. “An entirely classified notification is simply not appropriate in a democratic society, and there appears to be no legitimate justification for classifying this notification.”

There is also no obvious sign of a long-term strategy to head off Iranian reprisals — apart from Trump’s increasingly belligerent tweets.

“These Media Posts will serve as notification to the United States Congress that should Iran strike any U.S. person or target, the United States will quickly & fully strike back, & perhaps in a disproportionate manner,” Trump wrote Sunday.

But there was dismay within the administration over Trump’s earlier threat to attack “cultural” sites in Iran if the Tehran regime went after Americans to avenge Soleimani. An attack on cultural sites like a religious or historic monument might endanger civilians, could violate several international treaties and would likely be considered a war crime.

But Trump reiterated his threat to reporters on Air Force One as he flew back to Washington from his vacation in Florida.

Trump also threatened to impose stringent sanctions on Iraq if US troops were forced to leave.

Pompeo, appearing on CNN’s “State of the Union,” insisted that Soleimani’s demise made the world safer — despite the US telling its citizens to leave Iraq.

“The Middle East was unstable. We are creating a place and an opportunity for that stability,” Pompeo said.

“I know that the risk to America over the long run is much reduced as a result to the actions President Trump and our administration has taken in these last three years,” he said.

The secretary of state also improbably claimed that the Obama administration “kicked off” a war with Iran with its deal that froze Iran’s enrichment activity and halted what the US says was a march towards a nuclear bomb.

“It told the Iranians that they had free rein to develop a Shia crescent that extended from Yemen to Iraq to Syria and into Lebanon, surrounding our ally Israel, and threatening American lives as well,” Pompeo said. The Trump administration argues that the nuclear deal was too limited and didn’t curtail Iran’s support for extremist groups in the Middle East or the threat from the Islamic Republic’s missile program.

Critics warned that while Soleimani was a malignant force, as wrangler of Iran’s terrorist proxies, and was responsible for advanced weaponry that killed hundreds of US soldiers in Iraq, the costs of killing him may outweigh the benefits.

“I don’t know what the President’s motivation here is but I think it was a reckless decision that increased the risk to Americans all around the world, not decreased it,” House Intelligence Committee chairman Adam Schiff told CNN.

“Last week, the Trump Administration conducted a provocative and disproportionate military airstrike targeting high-level Iranian military officials. This action endangered our servicemembers, diplomats and others by risking a serious escalation of tensions with Iran,” Pelosi wrote in a letter to House Democrats announcing the resolution.

But one of Trump’s top congressional allies, Sen Lindsey Graham, R-South Carolina, backed the strike, calling Iran the “cancer of the Middle East” in an interview with Fox News.

The administration insists it does not want war with Iran. But its claims it is not seeking regime change were undermined by its elimination of Soleimani — the most powerful Iranian leader barring Supreme Leader Ayatollah Ali Khamenei.

The fear now is that a military response to Soleimani’s killing by Iran will set off a cycle of escalation that could lead the two sides to the cusp of a disastrous war.

The events of the past few days have seemed inevitable given the hardline Trump policy toward Iran, and the lack of a realistic diplomatic off-ramp that might ease tensions.

When Trump took office, Iran’s uranium enrichment program was frozen. The President’s decision to ditch the nuclear deal and “maximum pressure” campaign brought Iran’s economy to its knees. Far from halting what the US says is Tehran’s malicious regional activity, the policy seems to have exacerbated it, leading to Iranian attacks on shipping in the Strait of Hormuz, a Saudi oil refinery and a militia strike that killed an American contractor in Iraq and prompted Trump to take down Soleimani.

The showdown with Iran is deepening as another crisis caused by Trump’s disruptive choices — his impeachment over his demand for political favors from Ukraine — tests national unity at home.

Recent days have seen a widening dispute between the House and the Senate over the shape of Trump’s impeachment trial and damaging new revelations strengthening the case that the President abused his power.

Both crises reflect the trends that drive the Trump presidency — including questionable administration standards of trust, transparency and truth, a hyper-political approach to foreign policy and the impulsive personality of an commander-in-chief who acts on instinct and accepts few limits on his power.

Democratic presidential candidate Sen. Elizabeth Warren of Massachusetts on Sunday questioned the timing of the attack on Soleimani.

Asked on “State of the Union” whether she believes Trump is trying to distract from his impeachment in Congress, Warren responded: “I think it is a reasonable question to ask particularly when the administration immediately after having taken this decision offers a bunch of contradictory explanations for what is going on.”

One of Warren’s rivals for the Democratic nomination, former Vice President Joe Biden, warned that the President’s tweets and threats reflect his unsuitability to be commander-in-chief. And he said he was the most suitable candidate to replace him.

“We need to provide a steady, stable, experienced leadership. With all due respect, I think I’m best prepared than of anybody running for president right now,” Biden said at an event in Des Moines, Iowa.

His comments showed how the sudden escalation of the crisis with Iran, along with tensions that are unlikely to quickly ebb, could emerge as a major issue in the Democratic primary race and provide an opening for the party’s eventual presidential nominee.