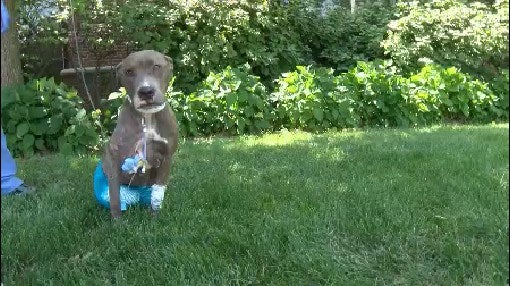 Animal control got a phone call about the injured pitbull on Tuesday. The female dog was found in an abandoned house.

Vets believe she was attacked by other dogs when they found bite wounds to her rear legs, sides and front shoulder. The injuries were infected and believed to be at least a week old.

The dog has had multiple surgeries as well as her back leg amputated.

Thanks to generous donors, Almost Home has raised over $7,500 and will use that money to help pay for the pitbull’s surgeries. The extra money will go toward other injured pets at the animal shelter.

Almost Home officials say, despite everything she’s been through, she’s a sweetheart.

“She is recovering, eating well and is expected to be out of the hospital hopefully by Tuesday,” said Almost Home Executive Director Stacy Rogers, “She’s doing better than we ever expected and we are so grateful for the generous donors who helped fund her recovery.”

A foster family for the recovering pitbull has already filled out an application and will take her home as soon as she is released from the hospital.