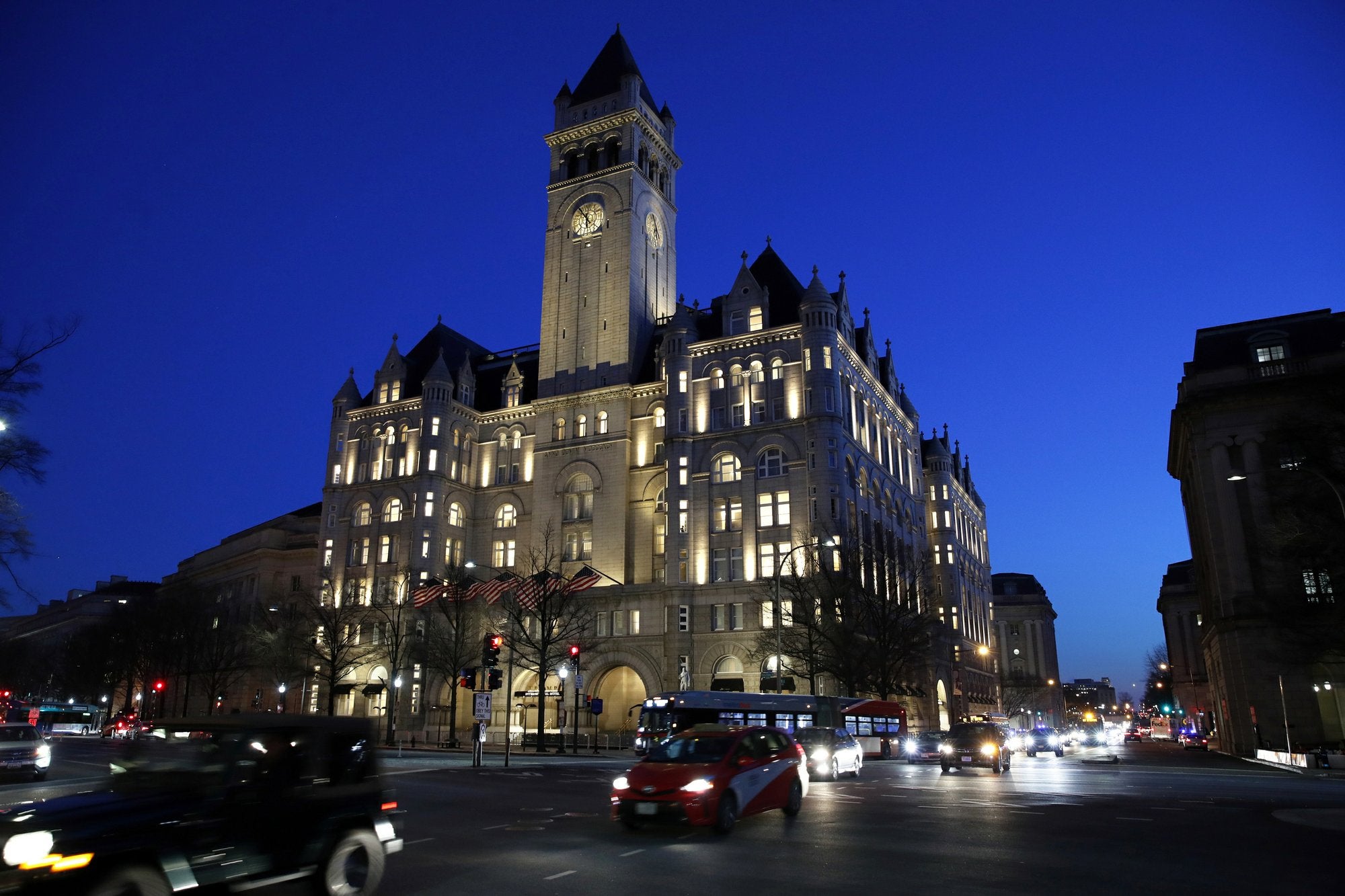 RICHMOND, Va. (AP) — The outcome of a lawsuit alleging that Donald Trump is violating the U.S. Constitution by profiting off the presidency could depend largely on competing definitions of an antiquated word: emoluments.

At the center of the lawsuit is the emoluments clause of the U.S. Constitution, which bans federal officials from accepting benefits from foreign or state governments without congressional approval.

The attorneys general of Maryland and Washington say government spending at Trump’s Washington hotel falls under a broad definition of emoluments: any profit, gain, or advantage.

Trump’s attorney’s, however, argue that the definition does not include payments for hotel stays. They argue that the emoluments clause only bars payments to the president if they’re made in connection with services he provides in his official capacity.

The debate over the narrow vs. broad definition is expected to be on display when the 4th U.S. Circuit Court of Appeals hears arguments in the case Tuesday.

Trump’s legal team is challenging a decision by a federal judge in Maryland to allow the lawsuit to go forward.

Judge Peter Messitte ruled in July that the attorneys general had made convincing arguments that the constitutional meaning of emoluments encompasses any profit, gain, or advantage. It was the first time a federal judge had interpreted the emoluments clause.

The 4th Circuit agreed to hear the unusual mid-case appeal. Trump’s lawyers are asking the court to overturn Messitte’s ruling that the attorney generals have standing to sue Trump.

Trump argues that as president, he has absolute immunity from the lawsuit. But Maryland and the District say that Trump’s alleged misconduct is unrelated to the functions of his office, so absolute immunity does not apply.

Maryland Attorney General Brian Frosh and District of Columbia Attorney General Karl Racine argue that Trump’s failure to divest himself of his business holdings — including the Trump International Hotel in Washington — put him in clear violation of the emoluments clause.

Frosh and Racine, both Democrats, say hotels in Maryland and Washington have been harmed because foreign and state government officials are more likely to stay at Trump’s hotel in an attempt to curry favor with the Republican president.

“It’s not just making something up — it’s in the U.S. Constitution — he’s prohibited from taking payments from foreign governments or from states … and he does each one on a daily basis,” Frosh said.

Trump won rights to lease the U.S. government’s Old Post Office site in 2012 and opened it as a luxury hotel in October 2016, just weeks before he won the presidential election.

The hotel, located just blocks from the White House, quickly became a hot spot for lobbyists and foreign officials. A public relations firm working for Saudi Arabia spent nearly $270,000 on food and rooms. The Philippine and Kuwaiti embassies also have thrown parties there.

Lawyers for Trump argue that the emoluments clause only prohibits compensation made in connection with services provided in his official capacity or in “an employment-type relationship” with a foreign or domestic government. The clause does not prohibit officials from engaging in private business transactions with government customers, Trump’s lawyers argue in a legal brief filed in the 4th Circuit.

They say the 4th Circuit “should not endorse such a sweeping and ahistorical interpretation” of the clause.

The broad definition is supported by research conducted by Georgetown University Law School professor John Mikhail, who searched dictionaries that were available to the framers of the Constitution.

Mikhail’s research, which was cited by Judge Messitte in his ruling, found that every English dictionary definition of “emolument” from 1604 to 1806 relies on one or more of elements of the broad definition, including “profit,” ″advantage,” ″gain” or “benefit.”

Mikhail’s study found that more than 92 percent of the dictionaries made no reference to the “office-and-employment-specific” interpretation put forth by Trump’s legal team.

But Trump’s more narrow definition of emoluments has its supporters, too.

Andy Grewal, a law professor at the University of Iowa, argues the “proper definition” of emoluments is “office-related compensation” received for the personal performance of services.

Grewal said that under that definition, dignitaries renting rooms at Trump’s hotel at market rates does not violate the emoluments clause.

“If a Saudi prince stayed at his hotel and left behind a $100,000 gift for Trump, that would be different than reserving a room at the same rate and terms as applied to everyone else,” he said.

Trump’s company said it has donated nearly $350,000 to the U.S. Treasury during Trump’s two years in office. The Trump Organization said the money represents profits from embassy parties, hotel stays and other foreign government spending at its Washington hotel and other properties.

Two other lawsuits accusing the president of violating the emoluments clause are also winding their way through other federal courts.