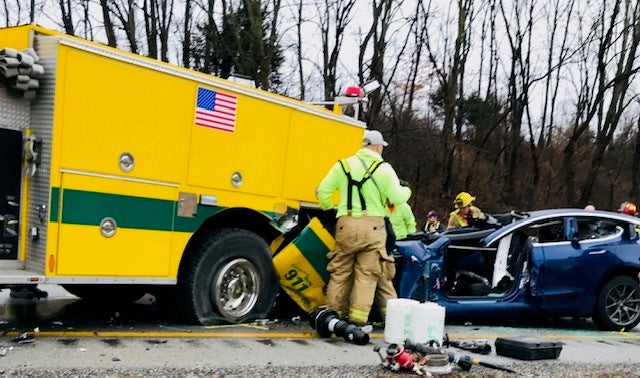 CLOVERDALE, Ind. (WISH) — An Arizona woman is dead and her husband is in serious condition after the man drove into a parked fire truck on I-70 Sunday morning.

Authorities with the Cloverdale Fire Department were called after 8 a.m. Sunday to assist with a single-vehicle accident at the 38-mile marker of eastbound I-70 in southern Putnam County, Indiana State Police said. That location is about a mile west of the State Road 243 exit for Greencastle.

Fire crews arrived to the scene and positioned their emergency vehicles in the passing lane of I-70 with the emergency lights activated.

A short time later, Derrick Monet, 25, of Prescott Valley, Arizona, failed to see the firetruck and drove his Tesla into the back of it.

Monet and his wife, Jenna Monet, 23, were seriously injured in the crash and became trapped inside the vehicle.

Fire crews extricated the Monets and transported them to an area hospital where Jenna later died from her injuries.

No firefighters were injured in the crash. Authorities say drugs and alcohol are not believed to be a factor.