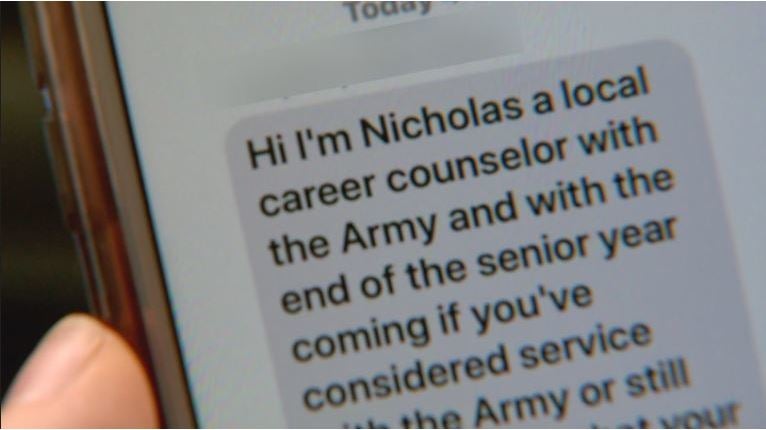 U.S. Army Recruitment leaders are apologizing after a recruiter sent a group text message and looped hundreds of Brownsburg High School parents into a chain of texts.

As posted by parents, the message reads: “Hi I’m Nicholas a local career counselor with the Army and with the end of the senior year coming if you’ve considered service with the Army or still trying to see what your options might be in the army fell (sic) free to call or text me and I’d be more then happy to help you.”

As parents tried to leave the group message, a ripple of texts went to every phone in the group, resulting in several hundred texts per phone. Parents also wrote on social media that they would attempt to leave the group and continue receiving notifications.

“I still kept getting pinged with everyone saying ‘remove.’ I had 307 in the text I got,” wrote one parent. “So not cool.”

Several others asked how the recruiter obtained their personal cellphone numbers.

“I kept leaving the conversation and reply’s kept popping up I had to reset my phone,” wrote one parent. “I never got a phone call asking if I was interested or if it was ok to give my number out.”

Despite posting complaints on social media, more than a dozen parents declined a request for an interview.

Leaders with U.S. Army Recruitment met with 24-Hour News 8 to explain that by enrolling in public school and not opting-out of higher education and armed forces recruitment contact, school directory information may be legally accessed for those purposes.

“ESSA, which is Every Student Succeeds Act, is a law that governs that high schools provide or all public schools provide a list of student names to universities, colleges and also military services,” said Capt. Cory Brown with U.S. Army Recruitment. “This is a program that releases the student’s name, address and phone number.”

Brown said the Army offers many career opportunities to graduating seniors and uses letters, phone calls, in-person visits and text messages to communicate those opportunities. However, he said, a mass group text is not a common recruitment procedure.

“I do apologize for that, by all means,” Brown said. “We would rather win the people over by letting them know what’s out there, what the Army has to offer, not a mass text message to the Brownsburg High School student population.”

He said that form of communication won’t happen again.

“I can understand now why they’d be disgruntled,” he said. “That’s not a standard practice.”

If you are interested in opting out of the higher education and armed services communication for any public high school, you must submit a form to your school requesting your directory information not be shared.

Brownsburg Schools Administrators sent 24-Hour News 8 this form, explaining all parents sign it at the beginning of the year. The form is also available here.

Those interested in opting out must send a letter to Brownsburg High School, 1000 S. Odell St., Brownsburg, IN 46112. The letter should simply state, “I request that my directory information not be shared with military recruiters.”

Parents may also request via email to their student’s Team Office. Those email addresses are on each team’s page on Brownsburg High School’s website.